Habit: The white mulberry tree can grow anywhere from 40 to 60 feet (13 – 18 meters) tall, and approximately 40 feet (13 meters) wide.5 Their shapes are quite variable, some can have saggy or droopy shapes, others can have rigid pyramidal or cone-like shapes.4 The tree has a relatively short life span, even though some have been found to live up to 75 years, most white mulberry have life spans averaging between 25 – 50 years.9

Leaves: The leaves of the white mulberry tree are generally glossy and thin with alternating lengths and shapes depending on the age of the tree. Young shoots tend to grow leaves up to 12 inches (30 cm) long with deep and detailed lobes. The older shoots however have an average leaf length range between 2 – 6 inches (5 – 15 cm), are not lobed, and are serrated or jagged at the edges.5 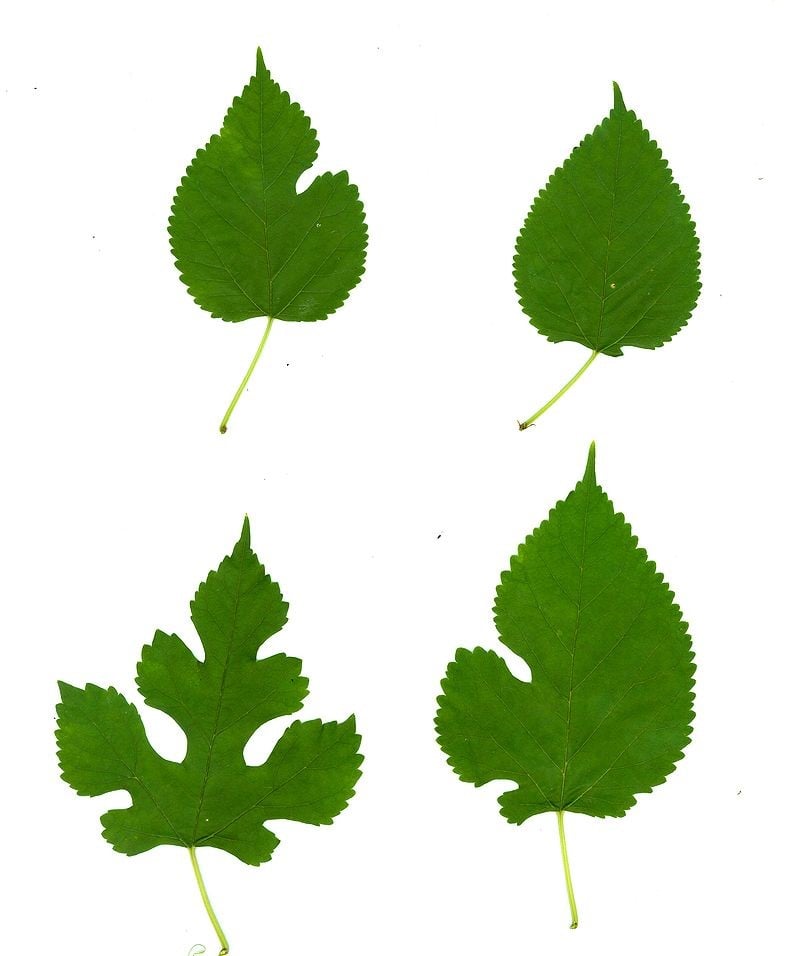 Twigs & Bark: The bark color of the White Mulberry is gray to brown and divided into narrow, scaly ridges (finely furrowed). The twigs of the tree are yellowish-brown and smooth. 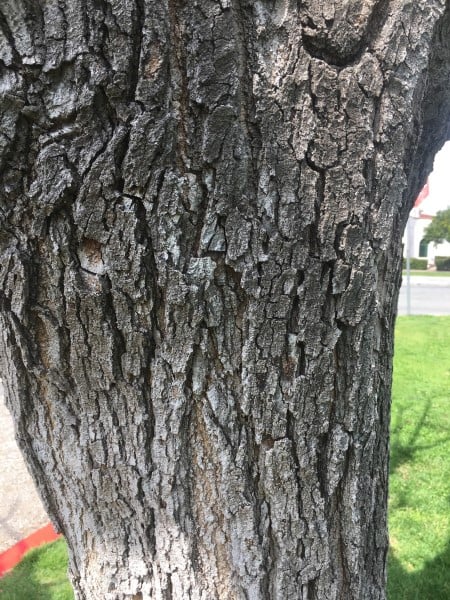 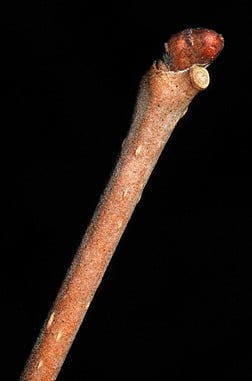 Figure 4. A twig of the White Mulberry tree.12

Flowers & Fruits: The tree produces single-sex flowers with no petals that are crowded in clusters called catkins and pollinate mainly by means of wind dispersal. Both catkin sexes are usually present on each tree. Male catkins are roughly 1 inch long (2.5 cm) and female catkins are approximately half of that size.5 The fruit produced is plentiful and blackberry-like in shape. Their color is characteristically white but can sometimes be pinkish-violent. The berries are poisonous when unripe due to a chemical called latex, which is toxic to humans, but are a rather pleasant fruit to enjoy when ripe. White mulberry fruits are usually ripe and ready to harvest in the spring. They taste sweet; however lack tartness unlike the closely related black mulberry, which is both sweet and tart.4 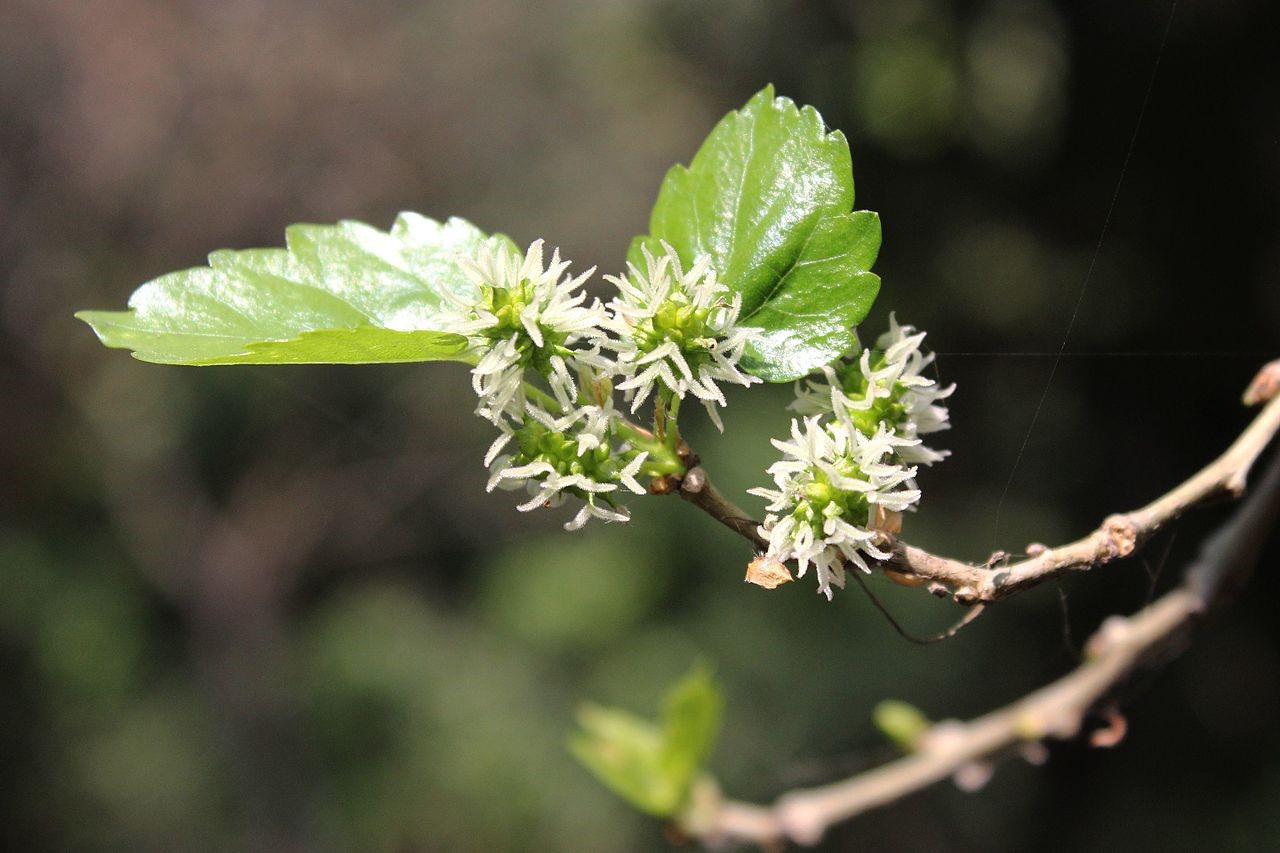 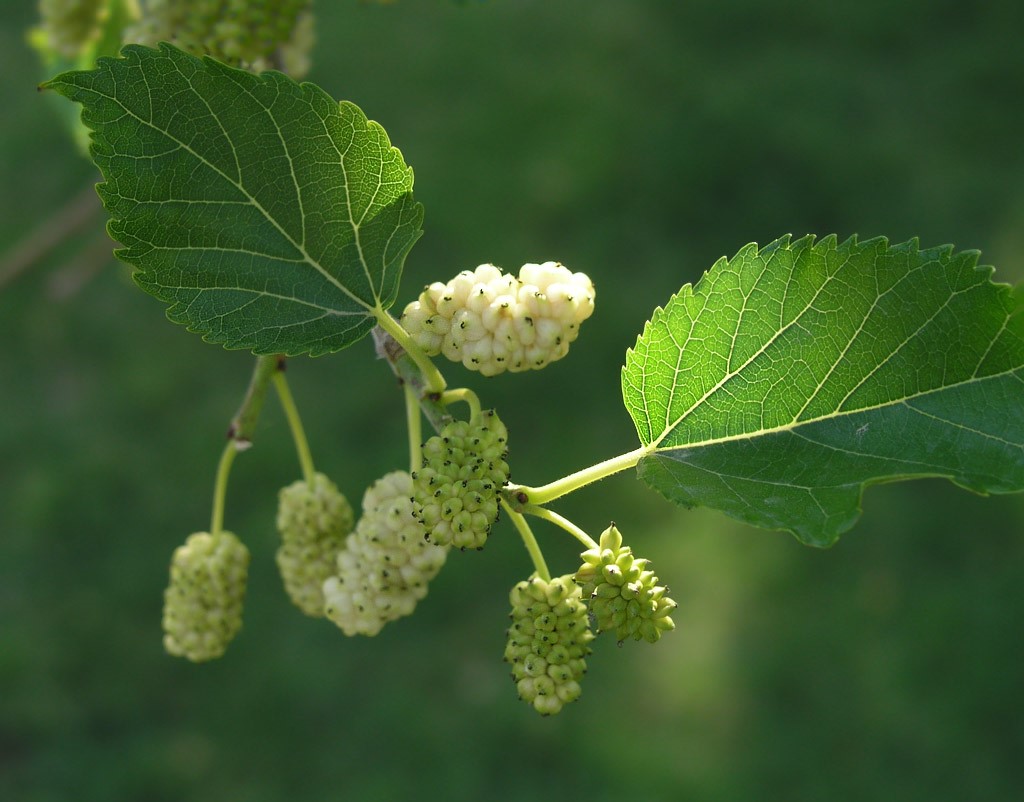 Native range: The species is a native to northern China. However, it is also widely grown and cultivated across many parts of the world such as the United States, Mexico, Australia, Kyrgyzstan, Argentina, Turkey, Iran, and a good portion of Canada, as well as many other countries. The White Mulberry species prefer warm and dry soil and tend to thrive in sandy soils such as loam (Figure 8).1 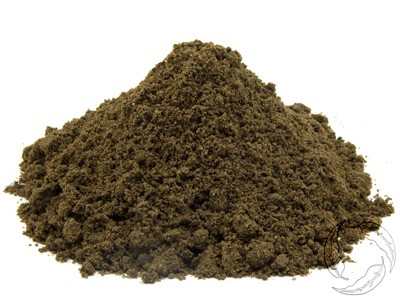 Ecological Notes: The White Mulberry tree is quite fascinating in regards to its seed dispersal mechanism and speed. The tree propels pollen from the male reproductive part of its flower; the stamen, at exceptionally high speeds averaging at about 350 mph (564 kph); which is almost half the speed of sound (760 mph or 1234 kmh). Making it the fastest moving plant of the entire plant kingdom known to this date.1

The tree is considered a generally robust species reflecting the amount of disturbance and poor quality soil and environments it has been observed to grow in.4 The species has shown great tolerance to disturbances such as winds, droughts, and salty soils. Some research has even provided significant evidence that White Mulberry establishment is favored in disturbed areas.2 Even though the White Mulberry has been able to adapt to a vast variety of substantially distinctive and harsh ecosystems and environments, it prefers and thrives in sunny areas of moderate temperatures with water-depleted sandy soils (loamy soils).4 It is generally unlikely for the White Mulberry to be diseased or attacked by pests, however, it has still shown occasional fungal diseases such as cankers. In numerous cases, the White Mulberry has even displayed symptoms of “popcorn disease”3, which is a fungal infection caused by the fungus C. carunculoides that swells the berries of the tree till they resemble the shape of popped corn (Figure 9).4

The leaves and fruits of the white mulberry serve as a resource for many organisms, leaves can be eaten as a vegetable and are useful as cattle food. Wild birds, hogs, poultry, and many other animals eat the mulberry fruit when ripe. Humans as well seem to enjoy the sweet fruit, and utilize them in pies, jams, and even wine.1 Due to the nutritional value the White Mulberry holds in its leaves and fruits, the species was first introduced to the United States in colonial times essentially to serve as a food source for silkworms; the primary producer of commercial silk worldwide.8

The White Mulberry Species is considered an invasive species in the United States and is even termed weedy by some sources. The species is known to invade and dominate a variety of disturbed areas all across the United States, mainly in parking lots, abandoned fields, roadsides, and the edges of forests. The ecological threat postured by such an invasive species is the fact that it can replace and transmit root diseases to many native species that have been around for many years, disturbing the ecosystem equilibrium, which could in turn negatively impact us humans.8 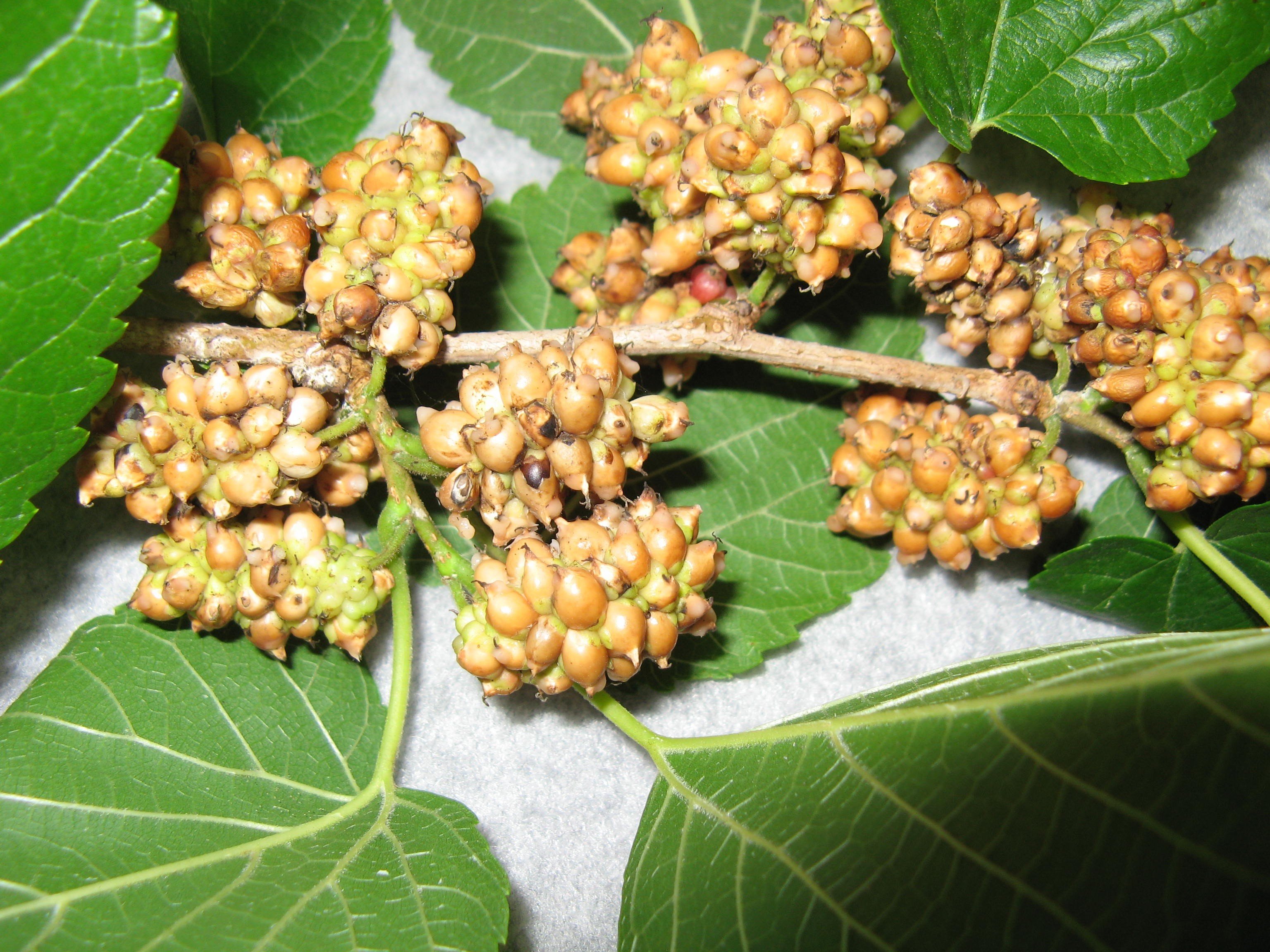 The white mulberry fruits have shown to possess vast amounts of highly beneficial biologically active ingredients. They have therefore been widely used in traditional medicine in China for example. Research has revealed the presence of several bioactive compounds in the mulberry fruits, such as alkaloids and flavonoids, which are considered effective antioxidants. Other beneficial bioactive compounds in the white mulberry fruit such as anthocyanins have been associated with major prospective pharmacological health benefits, such as anti-cholesterol, anti-obesity and hepatoprotective effects (the prevention of damage to the liver).7

Unfortunately, the tree has also shown some toxicity potential, and this has nothing to do with the fruit of the white mulberry, but the wood. Several studies have been studying the correlation between prolonged exposure to white mulberry wood and various health problems such as headache, nausea, vomiting, coughing, short breath, allergic reactions, and skin irritations. However, these symptoms seemed to last for only less than 24 hours for the workers exposed to white mulberry wood and dust for prolonged periods, such as those working in musical instrument making industries.6 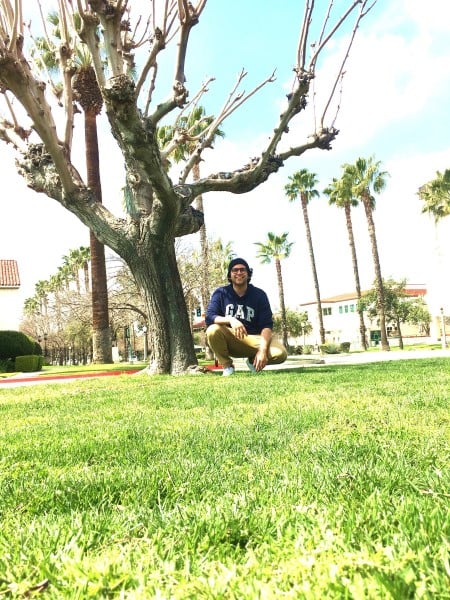 Figure 10. Picture of the biographer next to a White Mulberry tree on the University of Redlands Campus.