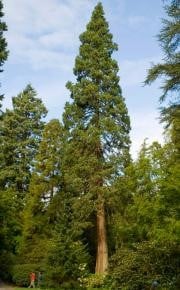 Habit: The coastal redwoods are the tallest trees in the world.  The tallest redwood trees range from approximately 300 to 367.8 feet tall. They are identified by this height and narrow pointed shape of their crown.  The branches of the tree sweep downwards then ascend near the ends. Redwood trees are known for their large biomass also, with a stem 3461 t/ha or 1,544 tons per acre (Griffith 1992). One recorded tree had a diameter of 84 inches (David, Douglas and Gerald). At relatively young ages, 50 to 100 years old, redwoods normally grow 100 to 220 ft. tall (Griffith 1992).

Cones: Redwoods have pollen (male) cones and seed (female) cones. The pollen cones can be identified by their small egg shape, while the seed cones are long and elliptical shaped (Earle 2017).  The male and female cones occur on the same tree but on different branches. The pollen from the male cones are dispersed by wind which reach the seed cones in order to start the reproduction process (David, Douglas and Gerald). Seed cones mature and open to spread the seeds in the fall around September. An interesting study showed that the older the parent plant, the more successful the seeds. Oddly, coastal redwoods have poor germination due to the lack of well-structured seeds (Griffith 1992). 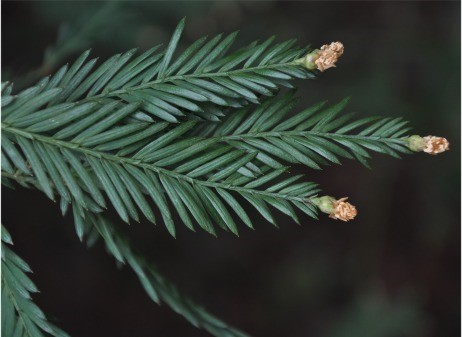 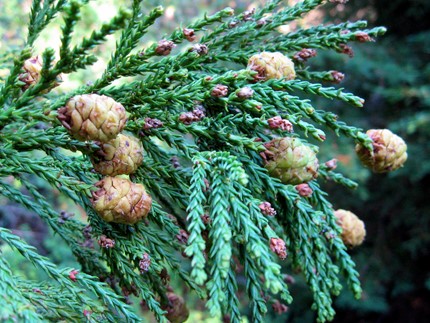 Native Range: They are mainly found in a coastal belt ranging from Oregon to California with a humid climate supported by average temperatures between 50 ° to 60 ° F. Rain often occurs in this area, but mostly in January and is known as a winter rain.  This rain helps keep the soil moist along with the annual, necessary, fog cover experienced; this fog allows the redwoods to decrease their water loss while also adding water to the soil (Griffith 1992).

The Coastal redwood tree, Sequoia sempervirens, is listed as endangered on the IUNC Red list page. These plants have continuously dwindled in amounts while also suffering from a fragmented habitat as the result of the generational logging of wood. In the California Redwood forest, there are many other types of plant species that tend to grow, also disallowing the redwoods to have complete dominance such as Pseudotsuga menziesii, Tsuga heterophylla, Abies grandis, Acer macrophyllum and Lithocarpus densiflorus (Farjon & Schmid 2013).

Ecological Notes: There are a few issues that can intervene in the successful growth of a redwood tree. One of those is the compactness of the soil. For the redwoods, soil that comes from soft sedimentary rock is the most suitable for growth. If the roots cannot find their way to water and the needed minerals through hard or compacted rocks/soil, the plant will not survive. The redwoods do not take well to soils containing high magnesium and sodium, but mainly flourish in soil called the Hugo soil series—explained in the Coastal Forest Practice Act District of California—which means the soil is mainly made up of loam, sandy, and moderately to strongly acidic (Griffith 1992).

Other challenges faced by the younger redwood generations include fires. Since they are young with thin bark, it is difficult for them to protect themselves from fire and sprout again once the fire has ceased. These trees have not lived long enough to build up their bark, which provides a layer of protection from fires. These fires mainly diminish the thickness of bark, hence older generations show signs of fires in which the trees have been through, but they always persevere from years of building up extensive amounts of bark (Griffith 1992).

The redwoods often are challenged by the other species of plants and animals in their habitat. Plants that are in direct competition with the redwoods attach to redwoods sprouts leading to damage. American black bears have also been found to rip large pieces of bark from the trees. There are insects that rely on and deplete the wood of the redwoods such as flatheaded twig borers, girdlers, redwood bark beetles, and the sequoia pitch moth, but these insects are not a huge threat to the redwoods (Griffith 1992). The main issue the redwoods face is the effects of man, logging (Farjon & Schmid 2013).

In the California Redwoods, there are many different species habituating and making use of the redwoods. The trees provide cover for many mammals such as the Roosevelt elk, black tailed deer and many other smaller mammals. But these great trees also provide a home to many pileated woodpeckers who build their nests inside the trees while also being a crucial home for the endangered marbled murrelet. The marbled murrelet exclusively nests in the Coastal Redwoods, and mainly the old-growth trees, so continuous logging of older plants will completely destroy the murrelet’s home (Griffith 1992).

In the past, Native Americans used the wood to make canoes and grave headings (Griffith 1992). Nowadays, the soft but decay-resistant wood is used in many different products including dimensional stock (lumber), shingles, table tops, veneers and turned goods (Griffith 1992). The trees are also aesthetically and spiritually pleasing, so proper management and controlled logging of these trees needs to be enforced. The Redwood forest in California is an amazing destination that we do not want to lose. 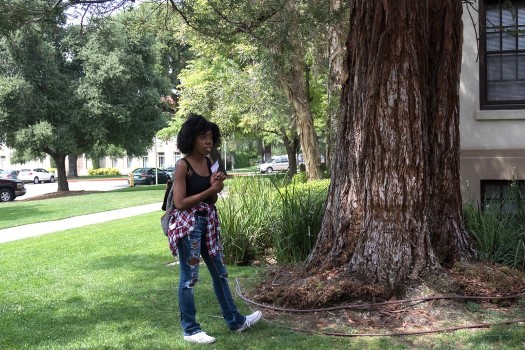