Habit: The species can be recognized as a large evergreen shrub or tree that can be anywhere from 4 to 14 meters tall with a horizontal spread of around 6m on average. [1][4] 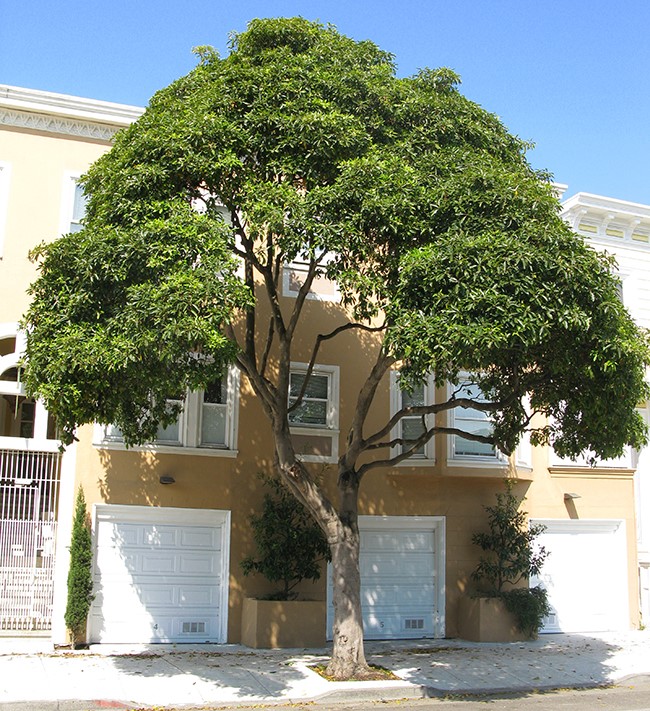 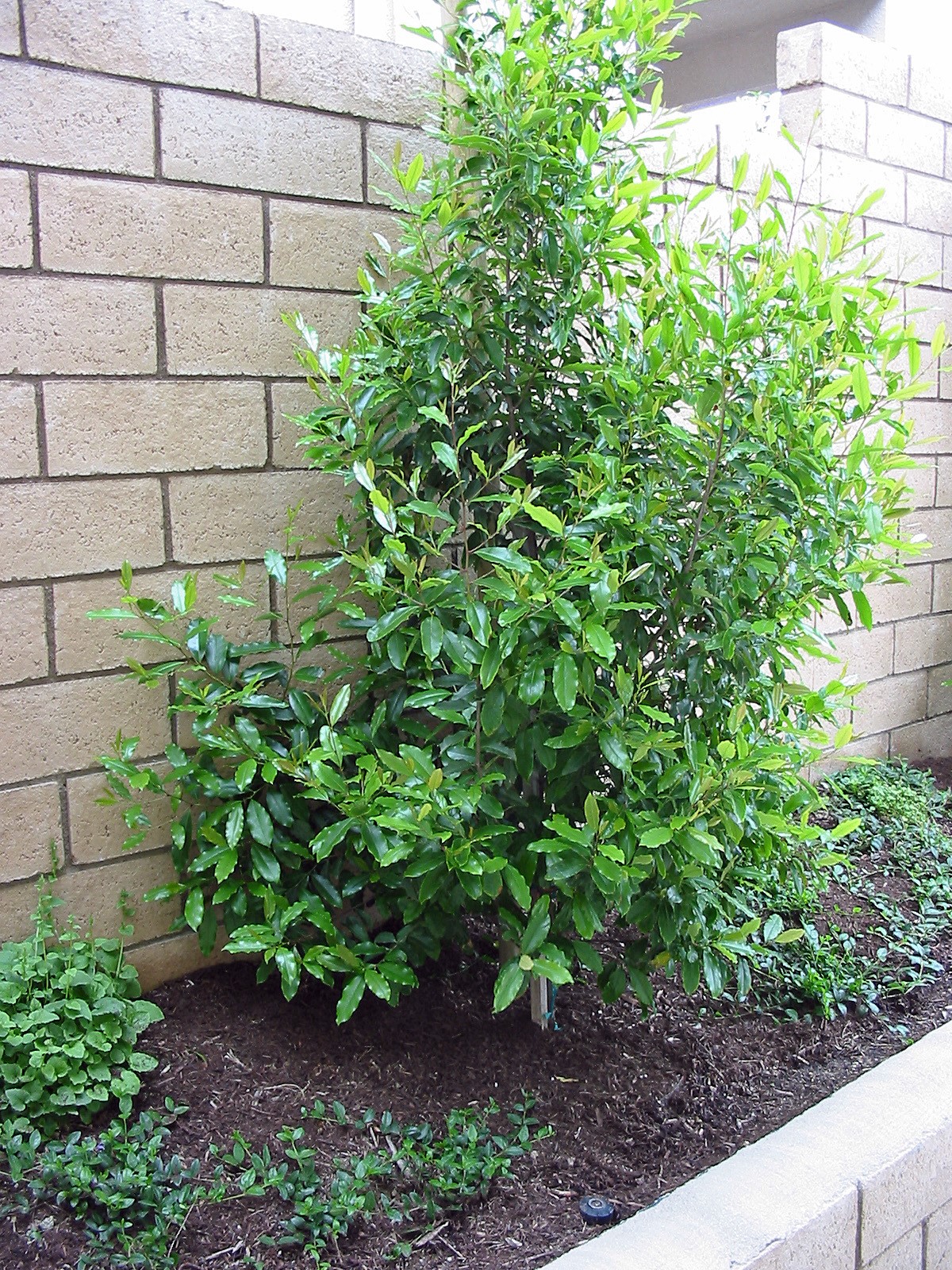 Leaves: This species has oval shiny dark green leaves, a pastier color beneath, and wavy margins. [3][4] The oval leaves with wavy edges are what gives P. undulatum its name. [3] The leaves start out with rather smooth edges as seen in figure 3 and slowly progress to reach the rigid wavy margins as shown in figure 4. [4] Leaves are alternately arranged or clustered at the tips of the branches as shown in figure 4. [2] 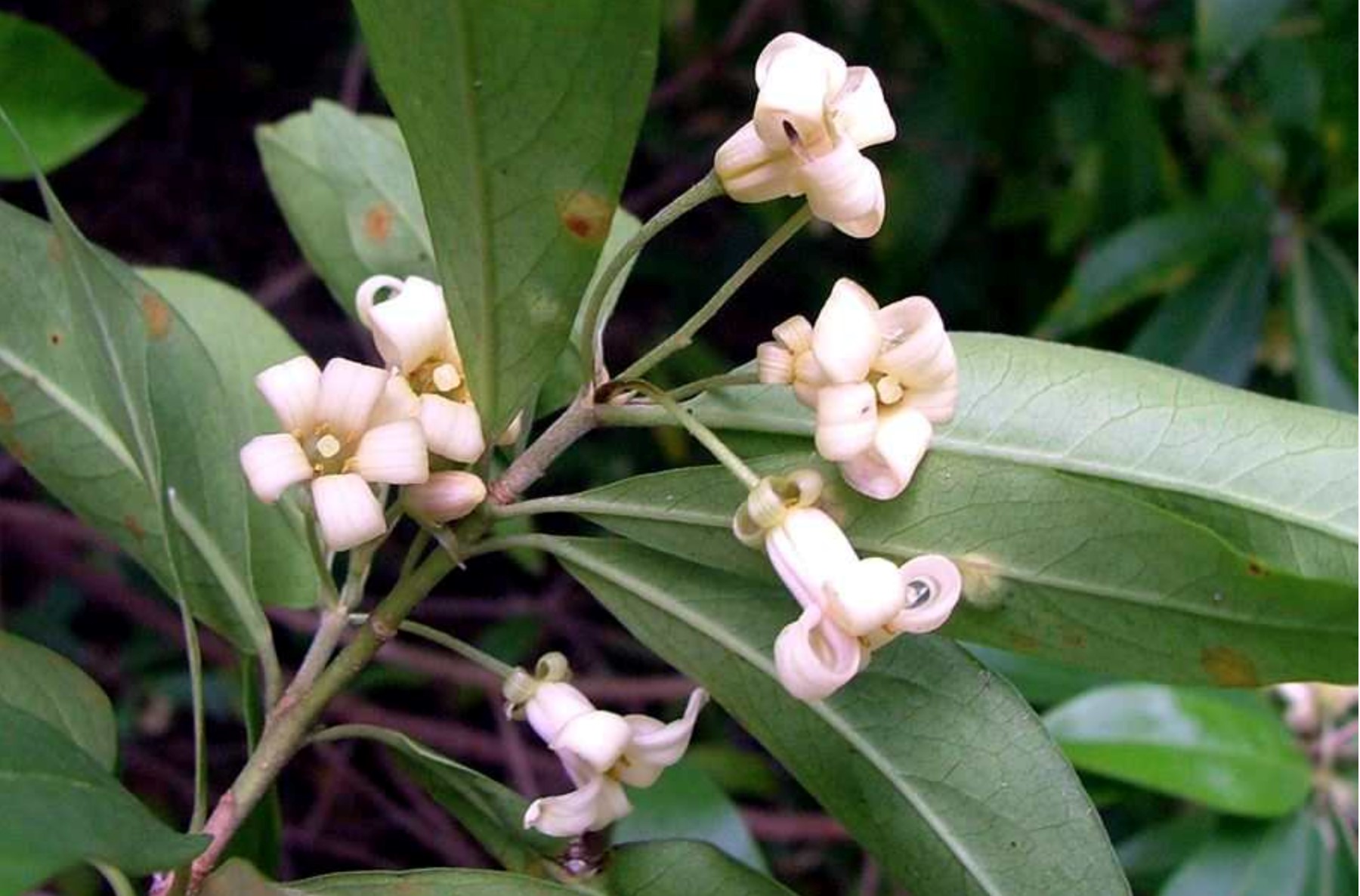 Figure 3:  P. undulatum at a younger age exhibiting relatively smooth edges as well as the traditional flower anatomy which consists of five petals that are bent backwards at the tips.6 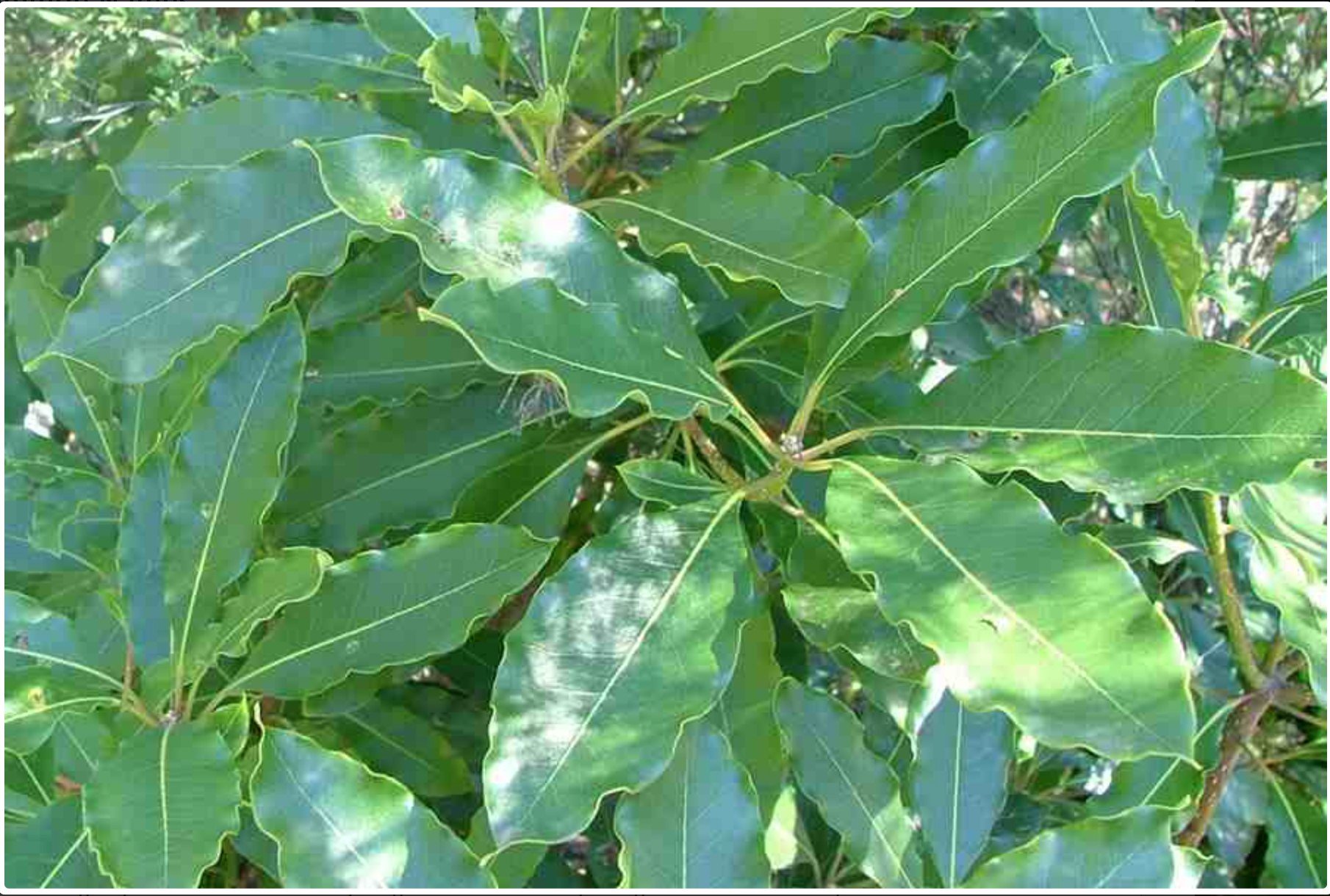 Twigs & Bark: Bark on P. undulatum has an opaque brown color and a rough, rigid, and grainy texture which can be seen in figure 5. [4][5] 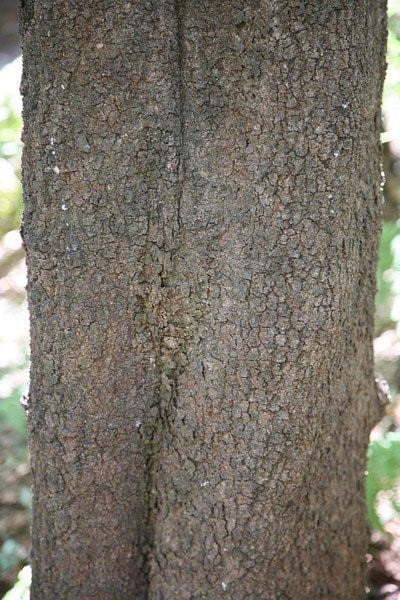 Flowers & Fruits:  Flowering for P. undulatum occurs November to January. [5] The flowers of this species are distinguishably sweetly scented with bell shaped creamy flowers that are 2.5 to 5.5 centimeters long. [4][5] The flowers bloom in small clusters of 4-5 flowers, and flowering occurs at the end of the branches as seen in figure 3. [5] The flowering clusters are often followed by orange fleshy fruit which are on average 13mm long as seen in figure 6 to the left. The hard orange capsules of the fruits which are about 10 mm across split open when ripe to expose 20-30 sticky seeds. [5] P. undulatum can reproduce by both self and cross-pollination. This is possible due to the flowers being hermaphrodiecious, meaning they have both male and female reproductive organs. Cross pollination is done mainly by Lepidoptera, an order of insects that includes butterflies and moths. Seed dispersal occurs when seeds get stuck on small animals such as opossums and foxes which are attracted to the fruits produced by P. undulatum.

Native range: The Victorian Box thrives in a sheltered situations and rainforest habitats, meaning it is a species which can be both shade and sun tolerant. It is especially successful in the wet forests in coastal areas between the Great Dividing Range and the sea from southern Victoria to southern Queensland in Australia. As indicated by the color distribution in figure 7. [1][7] 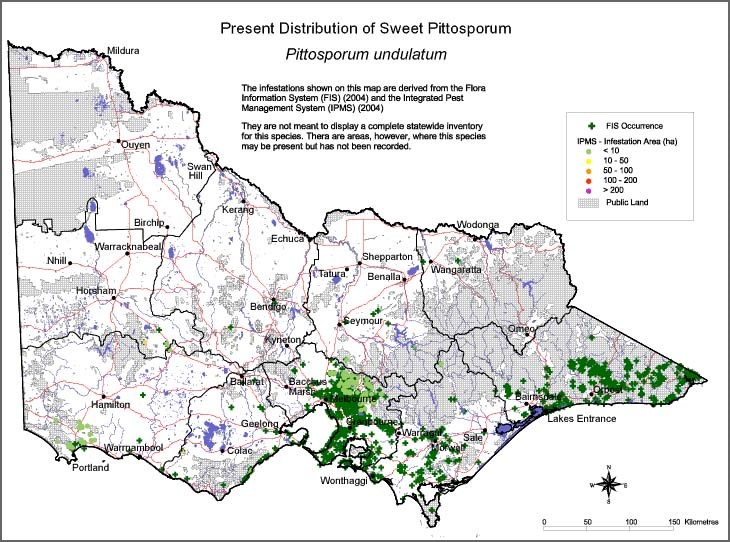 Figure 7: Reginal map of P. undulatum distribution and infestation in southeast Australia in 2016.7

The fruits are attractive to birds and other animals including opossums and foxes which are the cause of the fairly active biotic interactions with its surrounding habitat. Due to the stickiness of its seeds, they are often scattered by being sticking to footwear or being moved around through agricultural waste. Control of dispersal is difficult. The Victorian Box affects natural environments through shading, competition and changes in soil nutrients. Changes in fire regimes has allowed P. undulatum to out-compete fire-adapted native species. The Victorian Box is invasive in the Azores, New Zealand, South Africa, and the USA, but is a greater problem in the Azores, an archipelago of nine volcanic islands in the North Atlantic and an autonomous region of Portugal. [1] It is a serious weed outside its natural range in Southern Australia, specifically in Tasmania, Victoria, and other regions of Western Australia. It is a weed on King, Lord Howe, and Norfolk islands as well as in the Sydney district in areas where it does not occur naturally. [1] P. undulatum is commonly mistaken as a native in species in Tasmania. It appears to be Pittosporum bicolor in Tasmania which is invasive in coastal areas. [1]

The Victorian Box contains saponins. Saponins are found in many foods, such as some beans, and although they are fairly toxic to people they are poorly absorbed by the body and most pass straight through without any problem. They are also broken down if the food is thoroughly cooked for a long time. Saponins are much more toxic to some creatures, such as fish, and hunting tribes have traditionally put large quantities of them in streams, lakes, etc. in order to stupefy or kill the fish. [7] [2] The opened seeds can be boiled up to produce a gum. This gum can be used as a safe herbicide that represses the weed seedlings of various plants. [3] P. undulatum is grown as a wall like hedge to help in resisting oceanic exposure.[7] The wood of P. undulatum is used in the manufacture of golf clubs. [1] 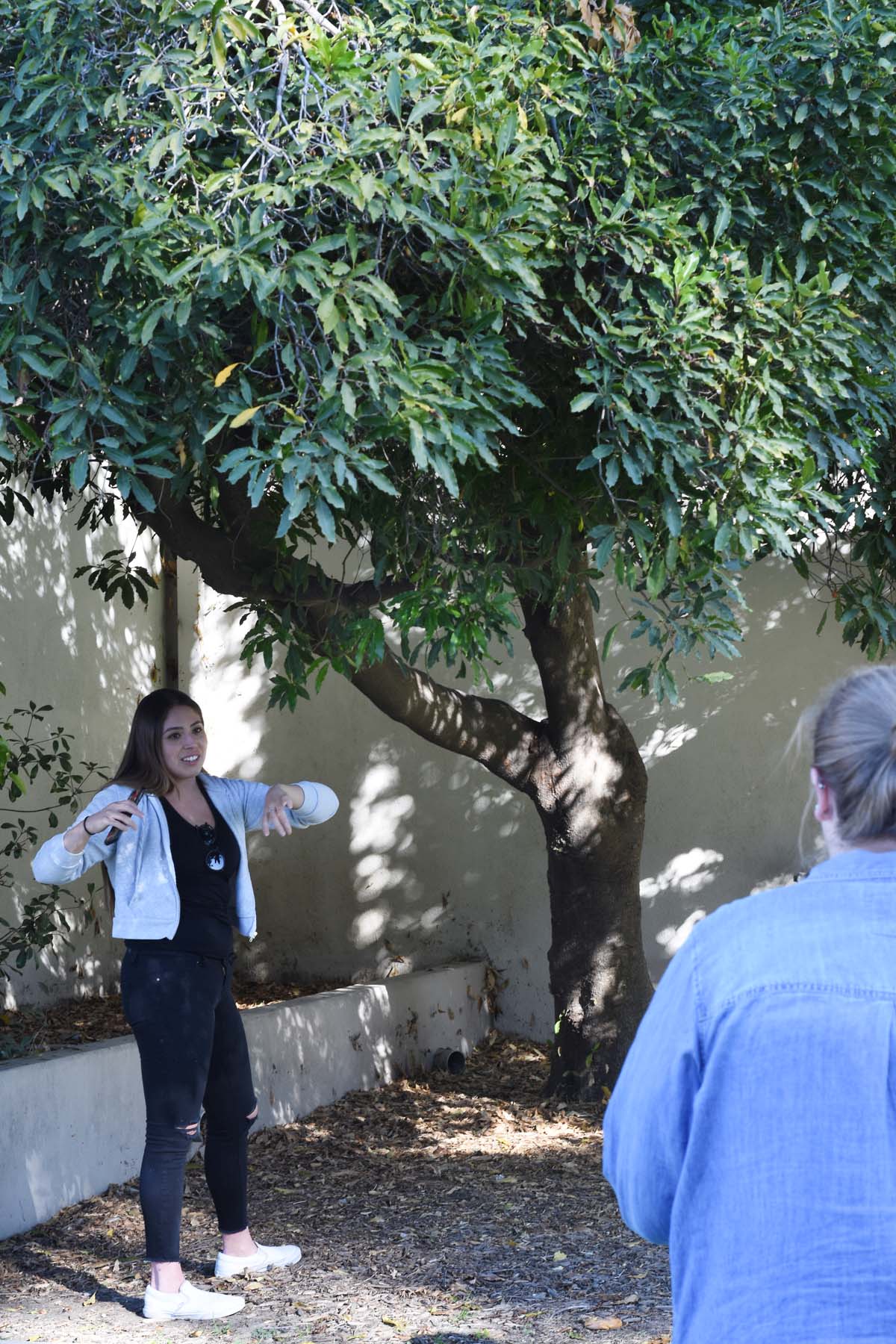