Ginkgo biloba, widely referred to simply as the ginkgo but also known as the maidenhair tree, is truly as unique as trees come. This fact is shown perhaps most elegantly through its scientific classification. Ginkgo biloba, as the sole surviving member in the Ginkgo genus, stands alone in the family Ginkoaceae, is by itself in the order Ginkgoales, flies solo in the class Ginkgoopsida, and, alas, is even the last from the phylum Ginkgophyta; its ginkgo all the way down. To the best of my knowledge, as the sole living member of its phylum, Ginkgos are unique in all Eukaryotes and if looking to find another phylum with a single representative, one must scour all of scientific classification to find the lonely archaea Nanoarchaeum equitans of the phylum Nanoarchaeota.

Habit: For the first few decades of their life ginkgo trees are distinctively thin with spaced out branches. Mature ginkgos have broader crowns and denser branching, generally ranging from 60-120 ft with some reaching over 160 ft.

Leaves: Unique fan shaped blades with bifurcating veins that split from two single veins at the base of each leaf. Leaves are usually undivided when growing from short shoots and deeply notched when growing from long shoots (ordinary branches). Ginkgos are deciduous, losing their leaves each fall after they have turned the deep yellow color for which they are well known.

Twigs and Bark: Perpendicular to long shoots, cylindrical short shoots up to 1 inch bear leaves in clusters of 4-6. Branches bear single leaves alternately. Bark and wood are similar to that of a pine or ceder, that is, moderately rough brown bark and soft wood.

Pollen cones and Ovules: Gingkos are dioecious and reach sexual maturity from ages 25-30. Male trees have pollen cones with sporophylls bearing sporangia. Female trees have naked ovules that grow in pairs at the end of a stalk. Both cones and ovules grow from short shoots each spring. On a mature tree an annual production of almost one trillion pollen grains is typical. Once it has landed on an ovule, after a few months the pollen grain will deliver the motile sperm(!) near to the egg where it will swim a short distance by beating is thousands of cilia to reach its destination. Once fertilized the ovules develop into inch long seeds with a smelly fleshy yellow pulp containing smelly butyric acid that covers the hard stone surrounding the embryo.

To say that the ginkgo is a relic of the past does not do its history justice. Relatives in the same phylum date back to the Permian period 270 million years ago, concurrent with the supercontinent Pangea, while predating both dinosaurs and flowering plants. As the continents split diverse species of Ginkgos were found across the northern hemisphere. However the truly remarkable feat of the ginkgo we have left with us is that its structure as we know it today has remained virtually unchanged for 200 million years. This feat of evolutionary endurance gives ginkgos the claim to fame of being the oldest structurally continuous plant (and perhaps life form period?).

At this point you may be asking yourself “How did the ginkgo accomplish all this”? Long life spans (some trees are over 1,000 years old), slow reproduction, and genetic flexibility are a handful of the tree’s attributes which have helped maintain its steady evolutionary history. Ginkgo trees persist best with plenty of water in soil that drains well. They can propagate vegetatively when disturbed both through spouting from the base of the trunk as well as from aerial roots in old plants. Ginkgos do best in full sun which is one reason why many species of ginkophyta were pushed into extinction by the success of competitive angiosperms. In fact, Ginkgo biloba’s range in the wild is extremely reduced from what it once was; today wild trees are found only in two spate locations in Southern China whereas they used to be spread worldwide. However, about 1,000 years ago the tree began to be cultivated in Chinese temples, from which it was next brought to Korea and Japan. Later on, in the 17th century, Europeans brought the tree to Europe and it has since been planted around the world wherever the climate was suitable. Not too surprisingly, considering the plant’s evolutionary history, the ginkgo is resistant to both pollution and pests, making it a successful city tree.

Ginkgos were first cultivated for the edible insides of their seeds, which is reported to have a mild cheesy, starchy, nutty flavor. They are commonly found in Chinese, Japanese and Korean cuisine. There are estimated to be upwards a million trees in orchards producing thousands of tons of seeds a year. While not grown for food in the US, East-Asian families and others who are curious will sometimes forage for the seeds in cities.  Though the wood is not commonly cultivated, in orchard trees that stop producing seeds in China the wood is shredded for particle board and in Japan is worked into chopping blocks, furniture and ornaments.

Ginkgos are planted widely as an ornamental in cities and botanical gardens around the world. Almost 75 billion trees fill streets, yards, and parks in the United States. Because female plants produced so many smelly seeds that many find to be a nuisance, most recently planted ornamentals are male.

Eastern medicine has used the seeds for various treatments from clearing mucus to killing parasites and more. Western medicine has focused on extracting compounds from the leaves as a memory enhancer sold in teas and supplements. It is widely popular in both eastern and western herbal medicine, though the few clinical studies which have tested it have shown little or no benefits. 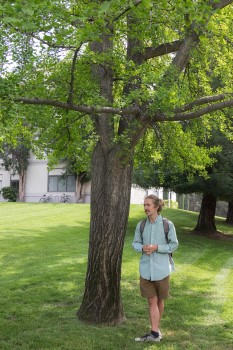