Habit: The Deodar Cedar is identified by its flat top (at maturity), widespread swooping branches, blue-green needles, gray scaly bark and small cones. Deodar Cedars are pyramidal when young due to their pointed top. These evergreen conifers mature to have broad, swooping horizontal branches with flat tops. Branches can spread from 10-15 feet outwards from the trunk. This medium growing tree can grow to be 20-50 feet tall. Trees in their native habitat have been known to grow to be 250 feet tall! They can grow up to 3 feet a year. 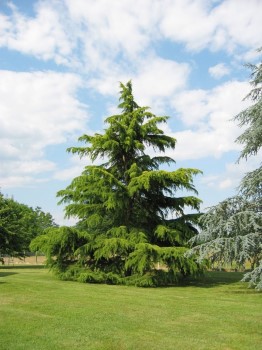 Leaves: Blue-green to grayish green needles that are fine to the touch grow in spiraling clusters on drooping branchlets. Needles range from 1 – 2 inches long. Needles can stay on the tree for 3 - 6 years before being replaced by new growth. 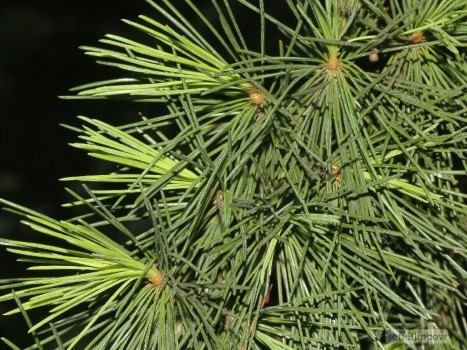 Twigs & Bark: Twigs are thin and straight. Trunks are covered in dark gray bark that becomes fissured or scaly as the tree ages. Mature trees have been known to have thick trunks measuring 3 meters in diameter.

Cones: The Deodar is monoecious since it has both male and female cones that grow on the same tree. Male cones, known as catkins, are typically located in the lower branches of the tree. They give off large amounts of pollen in the Fall. Female cones grow at the tips of the upper branches of the tree. They are pollinated by the wind that blows pollen from the catkins to the female cones. Pollinated female cones grow in the Spring and Summer. In the Fall the growing green cones ripen and become brown in color as they mature. The cones can grow to be 3 - 6 inches long. Each scale on the mature cone contains two seeds. Seeds are light brown, triangular and have large wings. After 13 months, the cones become mature and the seeds are released. Seeds germinate and grow in the late Spring after overwintering in the soil. It can take a tree up to 45 years to become able to bear seeds, and only 1 year out of 3 is considered a good seed year.

Native Range: The Deodar Cedar is native to the Himalayas. It can be found at elevations ranging from 3,500 - 12,000 feet. They typically live in temperate forests, but can span across a range of biomes. Historically the cedar can be found living among other conifer and broadleaf tree species. They help to make up the coniferous belt in their native habitats high on the mountain side that spans from India to China. They are highly drought tolerant and do well in moist or dry soil. However, long periods of drought have been known the kill the tree. They can thrive in highly acidic soils, and have been known to be able to live seaside in mild climates. These have been planted throughout the west coast and southern states of the US, and across Argentina, Canada, China, France, Germany, Italy and Spain. 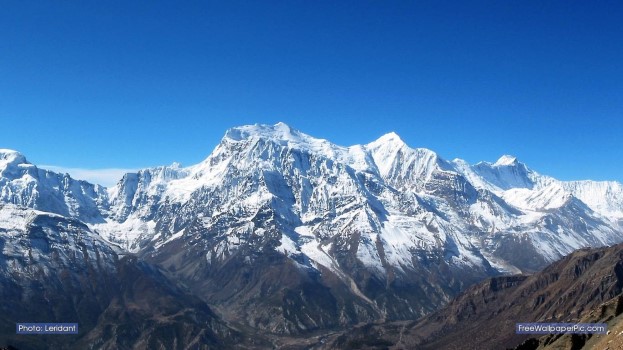 Ecological Notes: There are no serious pests or diseases that affect the Deodar. However, they can be susceptible to pests such as beetle borers and phytophthora. They are known to get diseases such as root rot and sooty mold. They are resistant to the pest verticillium. While disease may not pose much of a threat, overlogging of this tree does pose a threat to many native populations throughout Afghanistan, Pakistan and India.

Deodar cedars can live to be hundreds of years old. Their annual rings can give scientists an idea of how climate change is affecting the ecosystems they live in through dendrochronological records. The trees conserve soil and stop erosion to preserve surrounding vegetation. They also provide homes, cover, and food for many species such as crows and squirrels.

What We Use It For

The Deodar is an important source of lumber in many countries such as Afghanistan, Kashmir and India. Its wood can be used as fuel. Its heartwood is strong, durable and rot- and pest-resistant. It has a fine grain that polishes nicely. This wood is often used in carpentry and construction. The Egyptians used the cedar’s wood to build sarcophaguses for their mummies. The Deodar has often been believed to be the tree of God. It has often been used to build the structure of temples or palaces. The wood is also good for constructing bridges, making railroad ties, producing plywood and even making pencils.

The Deodar has many medicinal properties. The wood, resin and bark have anti-inflammatory, antioxidant and anti-cancer properties. Heartwood has diaphoretic and diuretic properties. Wood has also been used to treat fever, hemorrhoids, pulmonary and urinary disorders, insomnia, rheumatism, and diabetes. Tree bark is used to treat fevers, diarrhea and dysentery. Needles can treat tuberculosis. Resins can be used to treat joint pains, skin conditions and bruises, while oils distilled from wood chips are used as antiseptic to remedy bronchitis, acne, tuberculosis, catarrh arthritis and as a diuretic. The oils also help to soothe coughs, fight viruses, promote restful sleep, open sinuses and alleviate ear congestion. These oils have also been used as an insecticide, herbicide, molluscicide, antifungal, and to scent soaps.

The Deodar Cedar has become a very popular landscape tree. In the United States, Deodars used for landscaping are often decorated as a Christmas trees. Through decoration around Christmas time they have gained the nickname of the “California Christmas Tree.” 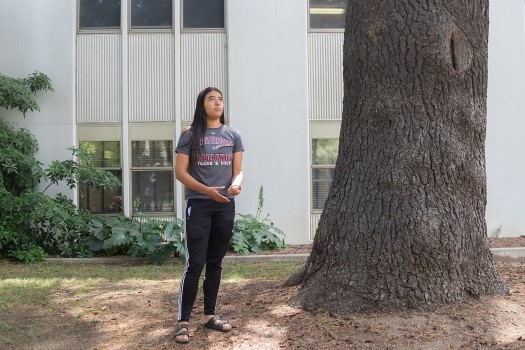