Although not many insects are problematic on loquat trees in California, commercial agriculture is threatened by a wide variety of pest species.  Many species from the Order Diptera that typically utilize other fruit bearing trees such as guava and apple have been able to use the fruit from loquat trees as a suitable host in which to lay their eggs and feed upon them.  Examples include the Caribbean Fruit Fly (Anastrepha suspensa Leow) and the Oriental Fruit Fly (Bactrocera dorsalis Hendel).  The damage from these species causes widespread decline of trees in many orchards worldwide and necessitates biological control of many of these pest species.

Range in size from 10-15 mm and are characterized by yellow or brown bands on the wings. 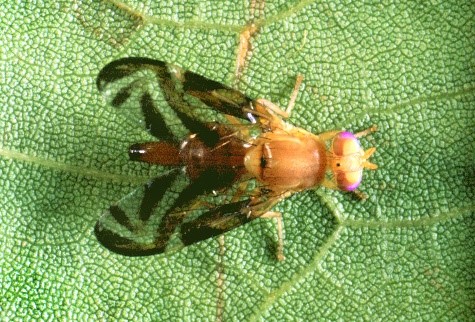 Native Range: The species occurs in many parts of the Caribbean; including Cuba, Puerto Rico, and Jamaica; however, it was introduced to Florida and is currently a widespread pest of many fruit trees (Morton, 1987).  The loquat tree is originally from Southern China, and due to the fact that the Caribbean Fruit Fly utilizes many fruit trees, it is likely that it made use of the tree once it was imported.

Ecological Notes: They are typically pests of guava, but are also problematic for many other cultivated fruits including grapefruit and loquats.  A. suspensa infests host trees by laying eggs directly under the skin of overripe fruit.  Larvae will then tunnel through the fruit, feeding on its contents before dropping out into the soil after a period of about 10 days to begin pupation (Weeks, 2012).  Infestation by the Caribbean Fruit Fly can lead to the rapid degradation of many fruit and can have devastating on crop yields in tropical areas.

Control Measures: It is currently considered a quarantine pest, however, insecticide sprays and the release of sterile males are advocated for control (Norrbom, 2008).  Bagging fruit has been implemented as well in order to inhibit infestation (Crane, 1980).  A. suspensa has many natural enemies (Hymenoptera) including parasitic wasps that are also used in biological control efforts.  Diachasmimorpha longicaudata (Hymenoptera: Braconidae), for example, was released in two areas of Florida where they are extremely problematic.  This decreased fruit fly populations by as much as 10% (Sivinski, 1996). 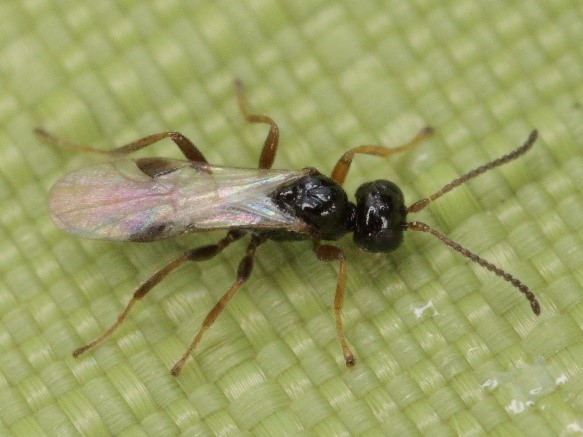 Typically reach about 8-10 mm and have varying markings, but are usually characterized by yellow coloration with black bands on the thorax. 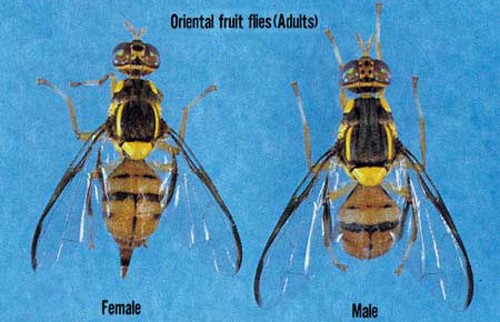 Native Range:  Bactrocera dorsalis is a pest of many fruit trees including banana, loquat, guava, papaya, and peach.  It is native to many tropical areas of Asia such as India, Bangladesh, and Sri Lanka.  It has been introduced to other areas such as sub-saharan Africa and some Pacific Islands like Hawaii where it is a rampant pest.  Due to the fact Bactrocera dorsalis is native to a similar geographic region as the loquat tree, it is likely that they are associated with each other and the fruit fly is able to utilize it as a host in many other areas the loquat tree has been introduced.

Ecological Notes: Female Oriental Fruit Flies utilize the fruit of many commercial trees by puncturing it with the ovipositor to lay eggs directly under the skin.  The larva will then burrow through the inside of the fruit feeding on pulp until about 10 days after hatching, where it will then fall to the soil beneath the host plant to begin pupation (Weems, 1999).

Control Measures: Many control measures have been utilized to eradicate Bractrocera dorsalis from agricultural areas, however the most popular methods involve the use of toxic bait to trap adults as well as spraying pesticides.  The use of chemicals to combat infestation, however allows for a resistant generation to rise.  This is why biological control methods are also advocated.  Parasitoids such as Opius incise (Hymenoptera: Braconidae), Cynips tinctoria (Hymenoptera: Cynipidae), and Aphytis chrysomphali have been determined to be adequate natural enemies of the fruit fly larva, and the release of these species in orchards can significantly aid in decreasing Bractocera dorsalis populations (Chen, 2011). 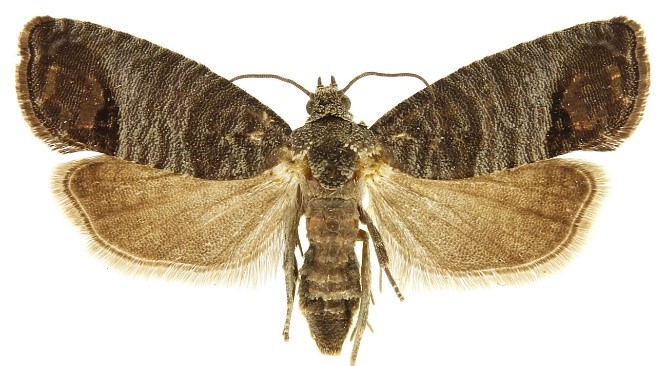 Native Range:  Cydia pomonella is a species of moth that is a common pest of many commercial fruit trees including apple and pear, but can also infest others such as loquat.  The species occurs worldwide; however, it most likely was originally native to Mediterranean Europe before it spread outward.  The codling moth was not associated with the loquat tree initially, given their original geographic ranges.  Due to the fact that it infests a wide variety of hosts, and that loquat trees are generally widespread, the codling moth was presumably able to make use of the loquat as well as many other commercial fruit trees after it was introduced to areas it was previously absent from.

Ecological Notes: Unlike the fruit flies, Cydia pomonella lays its eggs on the surface of fruit or its leaves and the larva will begin to burrow upon hatching to feed on the seeds, causing the fruit to rot.  The larva will then exit the fruit after about three weeks and will carry out pupation along the branches of the host tree.

Control Measures: Many insecticides have been used worldwide to combat infestation of commercial fruit trees by the codling moth, however, many emerging generations are becoming increasingly resistant to a wide array of these insecticides (Reyes, 2007).  Therefore, biological control measures are advocated to combat infestation using other methods such as selecting variations of fruit that mature earlier as well as releasing natural predators of the codling moth such as silverfish near host trees.

Extremely small (1-2 mm) and bright, green apple color with a pale abdomen on the dorsal side.  Can be apterous (wingless) or alate (winged). 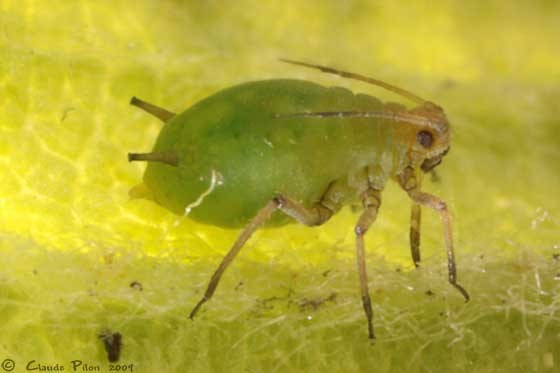 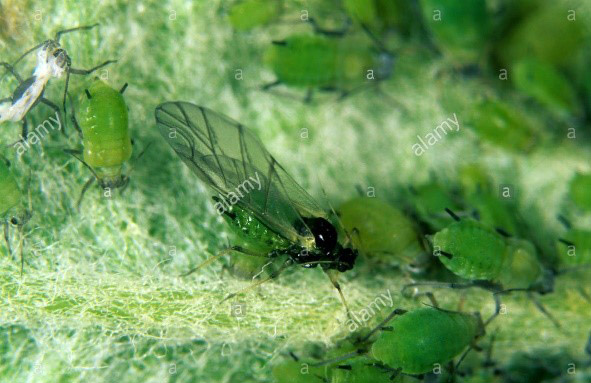 Native Range:  Aphis pomi is typically a pest of commercial green apples in many areas of the U.S. including Southern California.  However, it has been known to infest other fruit trees including loquats and pears.  This species, as well as many other species of aphids now in the U.S. was originally native to Europe.  It was introduced to North America by incoming Europeans during the 1840’s and is now considered a pest worldwide (Foottit, 2006).  Due to the fact that the loquat was originally native to southeastern Asia, and the aphid was native to Europe and specifically infested green apple trees before diffusing to the rest of the world, it is likely that the aphid eventually spread to the loquat tree as it did with many other commercial fruit trees.

Ecological Notes:  Aphis pomi typically colonize the leaves of green apple and other fruit trees where they will continuously reproduce.  Although they do not directly infest the fruit like many other pests of the loquat tree, when colonies on the leaves become particularly large galls can form on the fruit.  The large amounts of honeydew that are produced by colonies can also promote the growth of sooty molds, which can be problematic for commercial agriculture.

Control Measures: Although the use of pesticides is often advocated for widespread pests such as Aphis pomi, the family Aphididae has many natural enemies that prey on them making biological control of this species an extremely attractive alternative.  These include species such as the Lady Beetle (Hippodamia convergens), green lacewings (Family: Chrysopidae), brown lacewings (Family: Hemerobiidae), and syrphid fly larvae (Family: Syripidae).