Habit: The London plane tree is a large tree that ranges in height from 70 to 100 feet (21 to 30 meters) and in width from 65 to 80 feet (20 to 24 meters) when mature1. The London plane grows into a pyramidal shape in youth, but later rounds and becomes broad with age. The tree grows at a medium to high rate, with an increase of 13 to 24 inches (33 to 61 cm) in height per year2. Its roots are extremely tough, lifting sidewalks and invading sewer pipes3. The tree tends to be considered messy or disturbing because it tends to drop many leaves, twigs, and fruits. 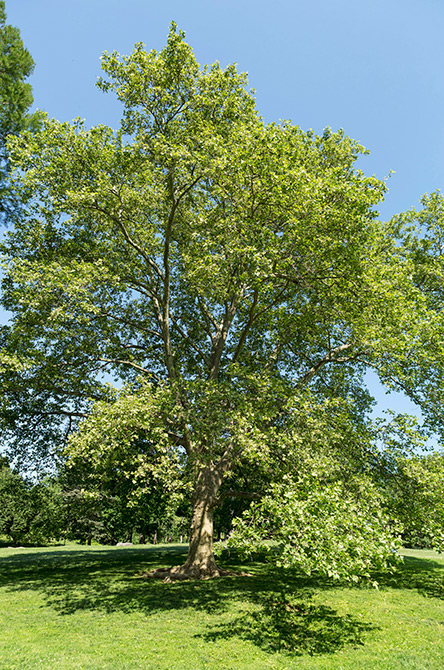 Leaves: The leaf of a London Planetree (Figure 2) is similar to that of a maple leaf simple with alternate arrangements that have three to five lobes. These leathery leaves are about 6 to 7 inches (about 15.5 cm) with roughly toothed edges1. The color of the leaf is a medium to dark green on top, with a paler green underneath where the sunlight does not hit. In the fall, these leaves become a yellow or brown color. 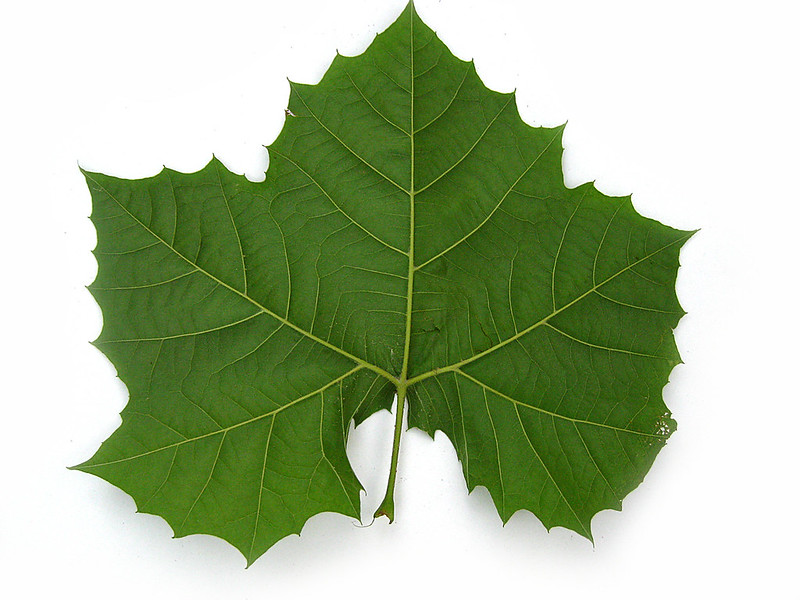 Twigs & Bark: As can be seen in Figure 3, the London Plane has a unique style of bark that has gray and brown shedding sheets that reveals a pale yellow inner bark. The tree is often mistaken for the American sycamore (Platanus occidentalis) since both have a smooth gray bark with a peeling tan trunk underneath. This adaptation is the bark’s lack of elasticity because the bark is unable to grow and expand as rapidly as the tree grows. This reveling bark is quite useful because it helps to eliminate parasites and harmful insects4. The twigs of the tree are in a moderate zig-zag pattern that can be seen below by Figure 4. They are a green color that turns into a dull brown with maturity. The axillary and terminal buds, which are covered by leaves, are a red hue that is covered with a single cap scale5. 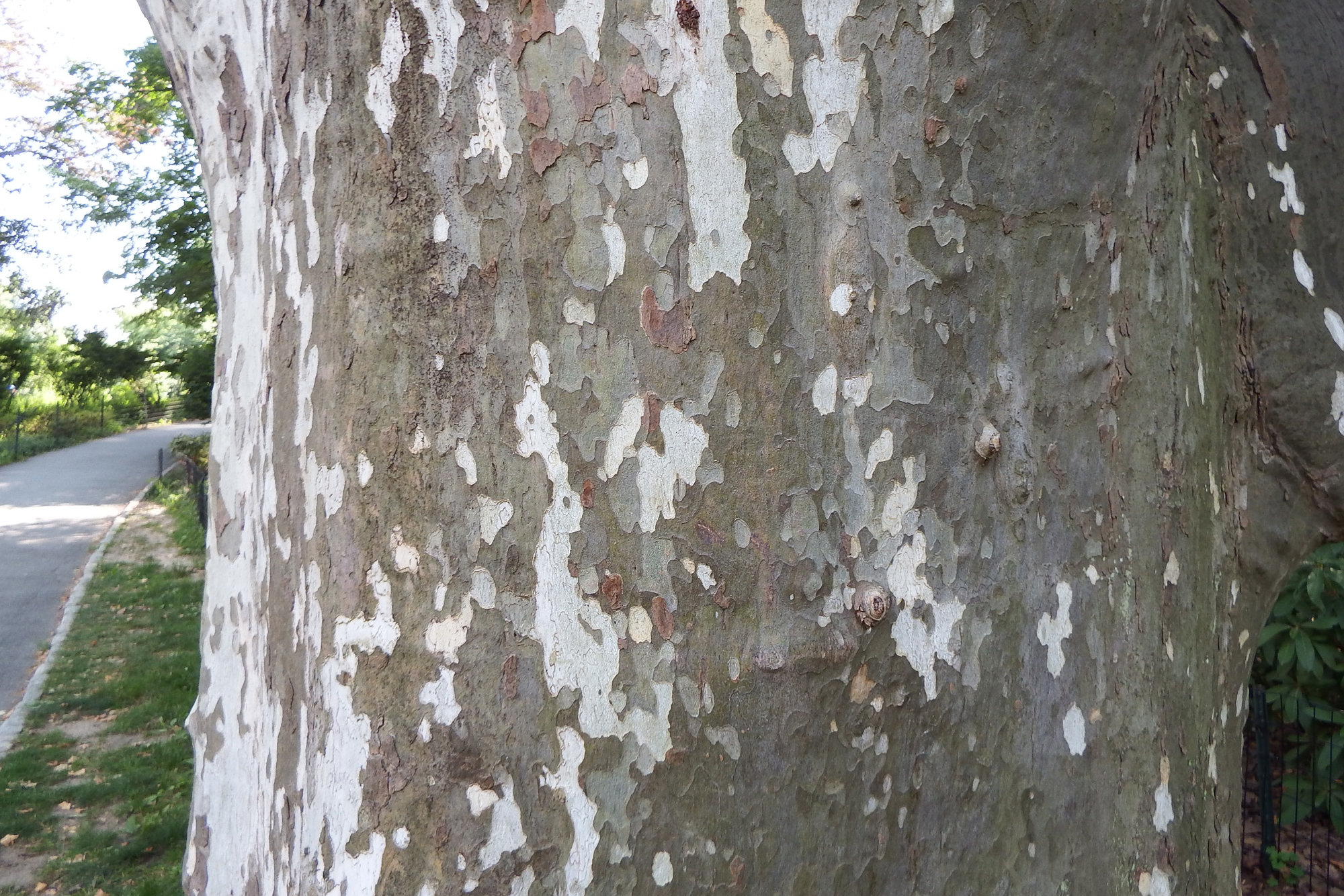 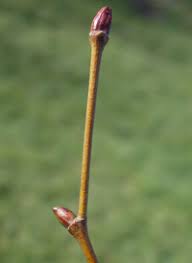 Flowers & Fruits: The London Planetree is monoecious5, meaning that both male and female reproductive organs are on the same individual. The flowers bloom in early spring, typically around the month of April. As shown by Figure 5, there are separate male and female flowers, usually two per stalk; the male flowers are green, while the female flowers are bright deep red. Although these flowers are not showy, they appear with dense globose balls on long stalks1. The fruit of the London Planetree (Figure 6) is a spherical ball filled with tightly packed seeds that are in capsules6. The fruit ripens to a brown color in October and persists into winter. The dry fruit is typically grouped 2 to 5 seed balls together, in which the seeds shatter during the winter months. A single fruit, or seed ball, is roughly 1 to 1 ½ inches (2.5 cm) in diameter that hang from the long stalks. 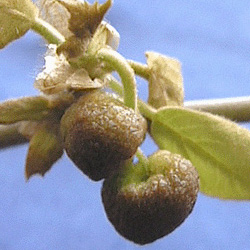 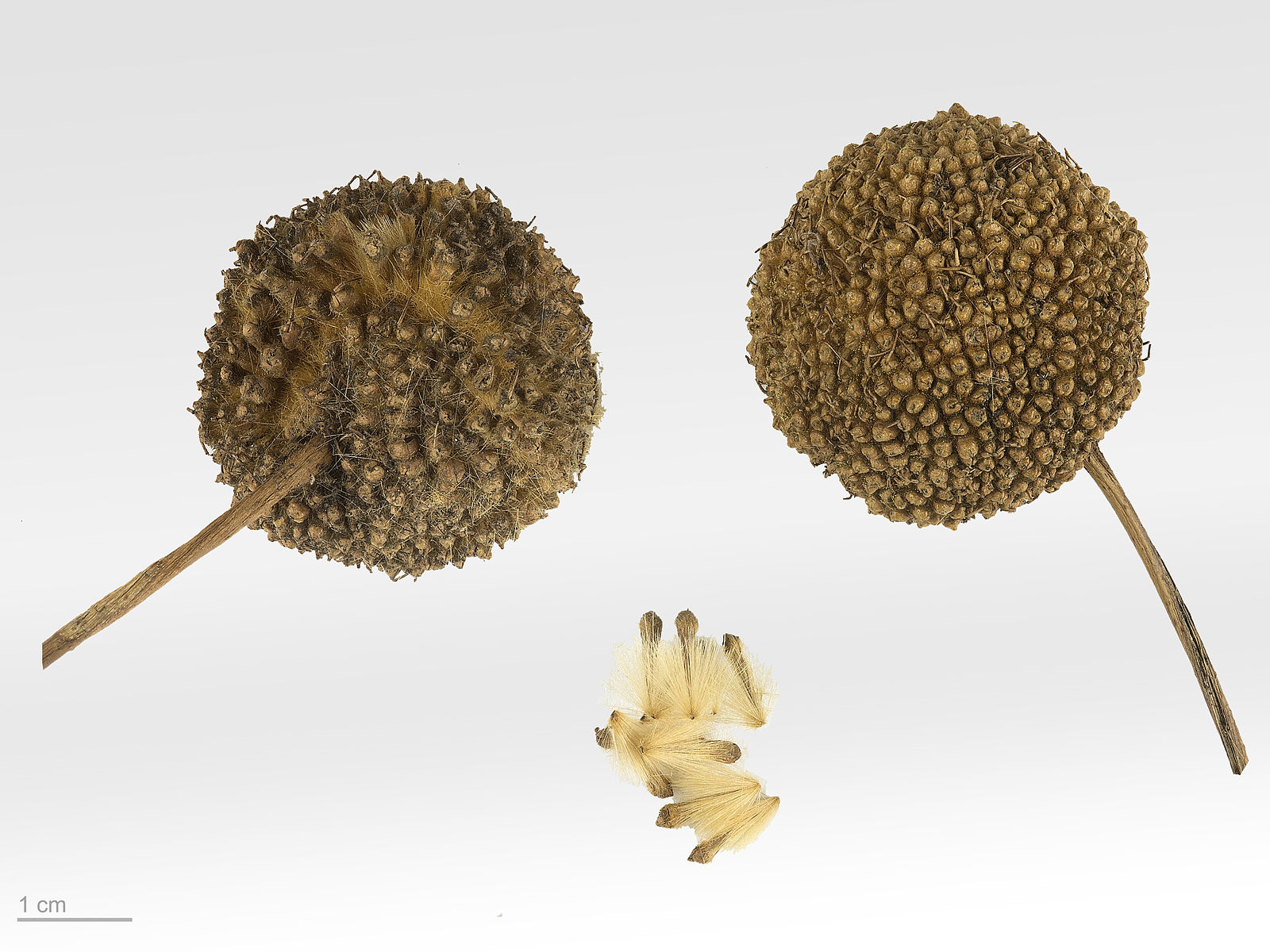 Native range: The London Planetree is of hybrid origin that was developed during the 16th century, through an accidental cross of Oriental plane (Platanus orientalis)4 and American sycamore (Platanus occidentalis)4 in either Spain or London. Scottish botanist William Aiton recognized the hybrid and categorized the tree in 1789. This tree could tolerate the smoke and pollution of London; therefore, it has been widely spread to places with moderate climates for the past 400 years8. In the United States, the London Planetree is expected to grow in Hardiness Zones 5 to 9 as can be seen in Figure 7. The tree prefers at least four hours of direct sunlight each day, with partial shade for optimal growth. These trees are able to grow in moist, sandy, acidic, alkaline, and wet clay soils8. Once the tree is partially mature, it is fairly drought tolerant. 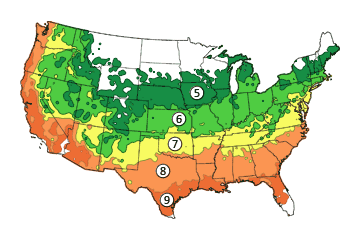 Figure 7. Hardiness Zones that the London Plane is expected to grow in the USA8

Ecological Notes: The sycamore lace bug and the American plum borer are common insects damaging the trees. The lace bug feeds on the undersides of the leaves, resulting in early leaf loss during the summer instead of the fall. Other common pests include powdery mildew, canker stain, and leaf scorch, aphids, scales, and borers3. A damaging disease of the sycamore is anthracnose, one that causes severe dieback of stems and foliage. However, many cultivars such as Ovation and Bloodgood have developed some resistance to frost cracking and anthracnose9.

The tree causes issues in urban uses because the stiff hairs shed by young leaves and the dispersing seeds can be an irritant when they are inhaled. It is known to cause breathing difficulties for people with asthma. Sydney, Australia tested a hypothesis that the pollen from the London plane was causing respiratory issues in pedestrians, in which there was a positive correlation between an increase in pollen sensitization and winter and springtime rainfall10.

The London Plane tree is most predominately known as a shade tree since it is able to live much longer in urban cities. Landscapers have planted this ornamental tree to line streets across the United States. It is an extremely suitable tree in cities because the roots are able to tolerate small spaces; however, they are still able to cause damage to sidewalks11. Not only is the tree common in the US, but Australia uses the London plane as a street tree because of its tolerance to warm weather and urban pollution6. The timber of the London plane is extremely hard and tough that it is nearly impossible to split; it also has dark reddish-brown flecks against a lighter background known as lacewood. Pioneers used the wood to make wheels for ox carts, but today it is used for furniture, flooring, veneer, and turnery wood9. 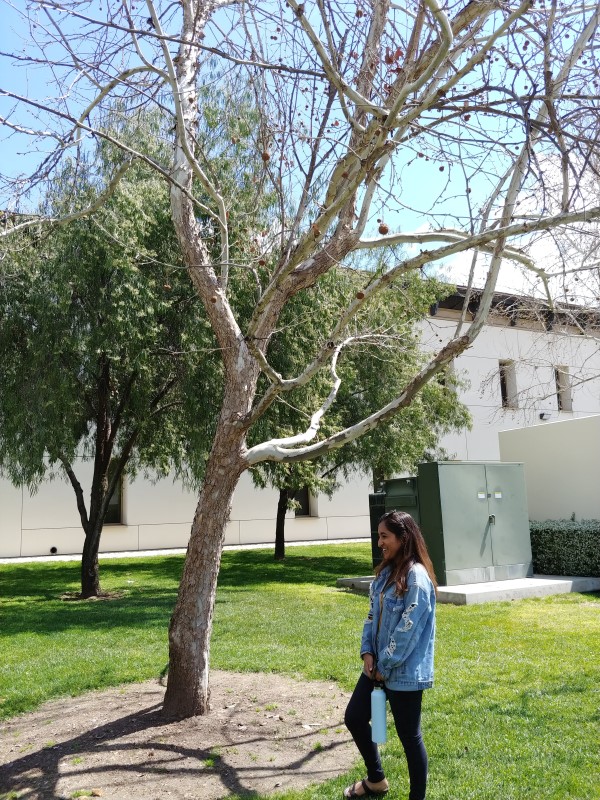 Figure 8. Picture of biographer standing next to a London Planetree.