Habit: A mature Honeylocust grows to approximately 70 to 80 feet (21-24 meters) in height with an average diameter at breast height around 24 to 36 inches (60-90 centimeters). While the largest of these trees measure nearly 150 feet (45 meters) tall and around double the average diameter at breast height, Honeylocust planted in regions either outside of their native range or with insufficient nutrients reach maturity at shorter heights.1 The crown of the Honeylocust is often open and covers a diameter of about 25 to 30 feet (7.5-9 meters).2 A far-reaching root system running at maximum depths of about 10 to 20 feet (3-6 meters) provide the Honeylocust the ability to grow well in a variety of highland and lowland environments.1 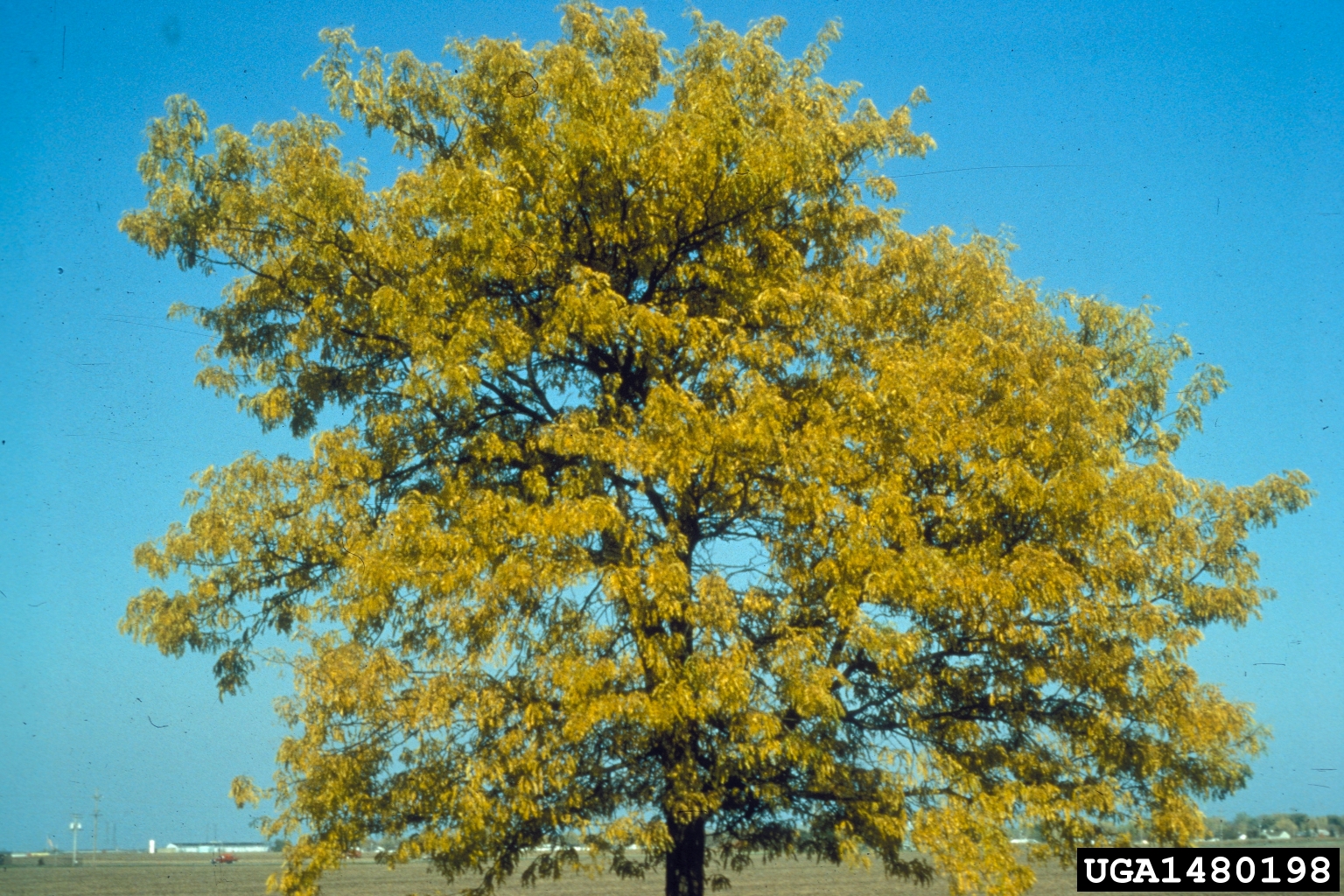 Leaves: The leaves of the Honeylocust are deciduous and are assembled in the shape of a bird feather with smaller leaflets branching out from a central seam. Leaves of the Honeylocust typically carry 3 to 6 leaflet pairs on either side of the seam. Each leaf extends anywhere from 4 to 8 inches (10-20 centimeters) from the branch while the leaflets are dark green ovals of only about 0.3 to 1.1 inches (1-3 centimeters) in length with a shiny top surface.2  In the fall, these leaves lose their green coloration, turning bright yellow before falling off of their branches in the early fall (see Figure 1).1 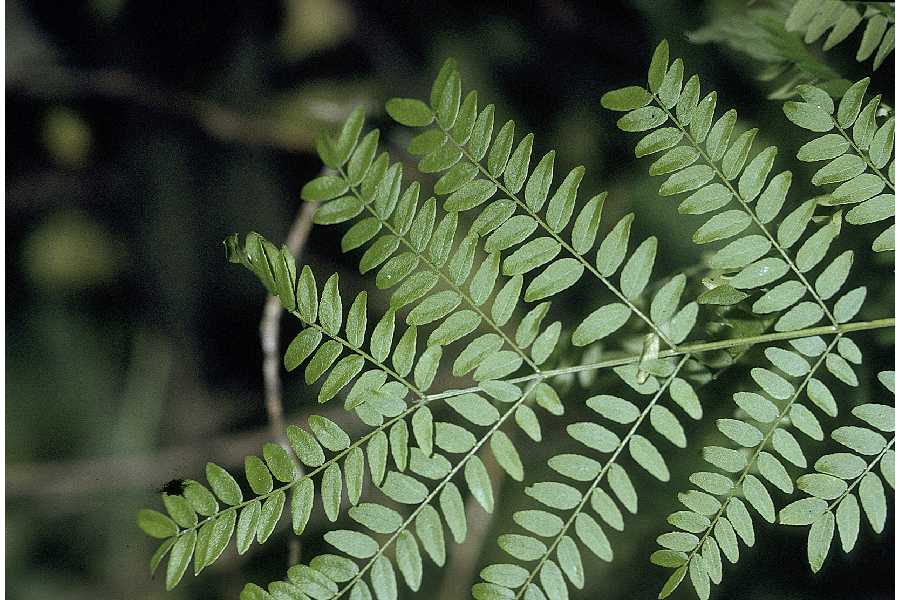 Figure 2.  Leaves of a Honeylocust tree all originating from a single branch. Image provided by the United States Department of Agriculture.

Twigs & Bark: The bark of the Honeylocust is composed of a multitude of long, smooth plate-like subsections that are separated by deep grooves. The color of the bark varies from close to black to a lighter, grayish variation which demonstrates hints of brown. The branches of the Honeylocust tree are typically lighter than the main trunk; however, the most defining characteristic of the Honeylocust is the reddish thorns which grow on the lower branches. These thorns protrude up to 7.8 inches (20 centimeters) from the branches and have extremely sharp points at their ends.2 When Honeylocust is grown in areas which are non-native, it is common to see these thorns throughout the entire tree.1 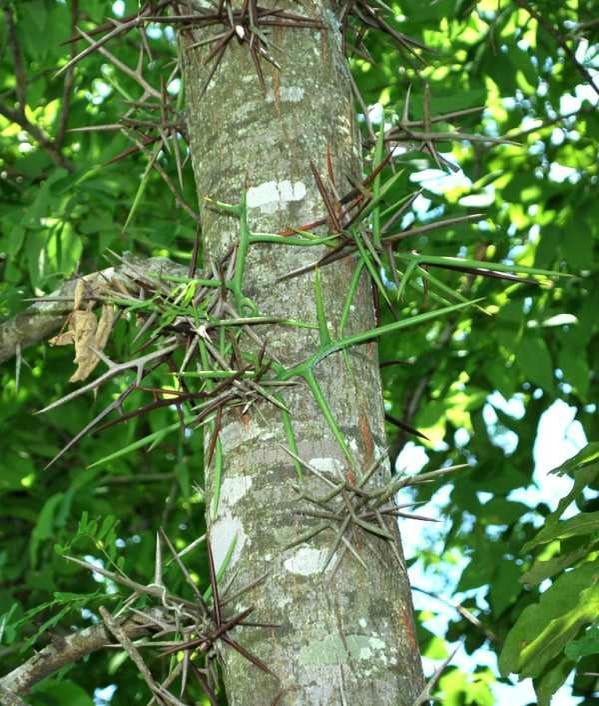 Figure 3.  New green thorns develop around the meeting points between the branches and main trunk before they mature and grow red. 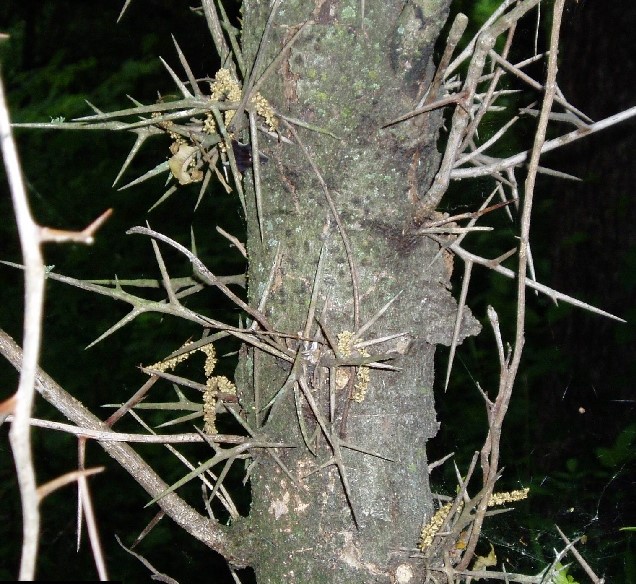 Figure 4.  The main trunk of a Honeylocust showing smooth, grayish bark with some deep grooves near the top of this section.

Flowers & Fruits: Flowering marks a beginning of the reproductive cycle for the Honeylocust, typically taking place between early May and mid-June depending on the latitude and climate.1 These greenish-yellow flowers emerge in cluster approximately 2 to 5 inches (5-13 centimeters) in length. Nearly all of the flowers on a single tree are of the same sex; however, it is common for Honeylocust to have a few flowers that develop both the male and female organs. This trait gives the Honeylocust the classification of polygamo-dioecious. The fruits of the Honeylocust are hard, dark brown, and belt-like pods usually about 1 to 1.4 inches (2.5-3.5 centimeters) in width and 6 to 16 inches (15-40 centimeters) in length at full maturity. As these fruits develop on the tree, they begin to spiral and twist. Each fruit contains multiple bean-shaped seeds approximately the size of a dime surrounded a sweet pulp which gives the tree its common name.2 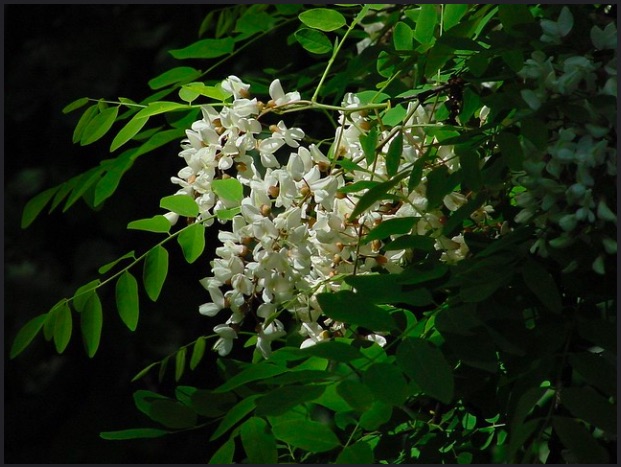 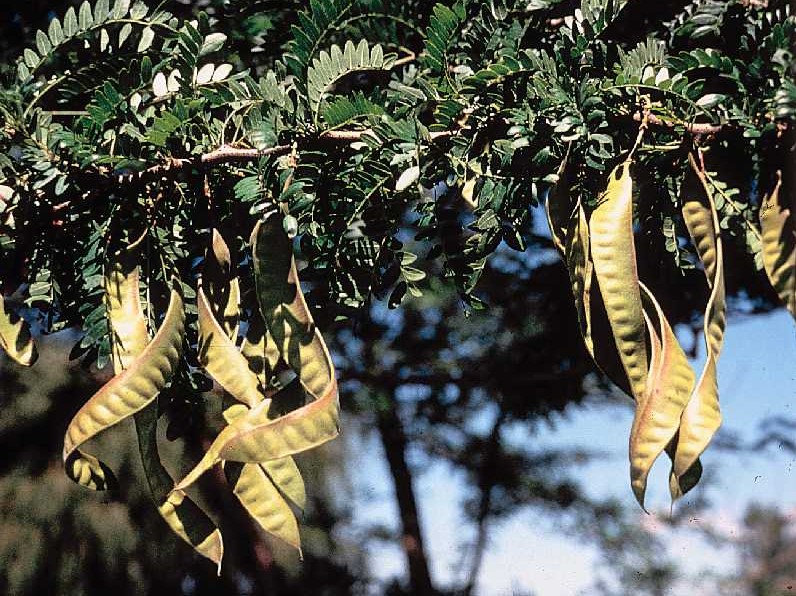 Figure 6.  Multiple maturing fruit pods beginning to spiral before being released by the tree. Image provided by the United States Department of Agriculture. 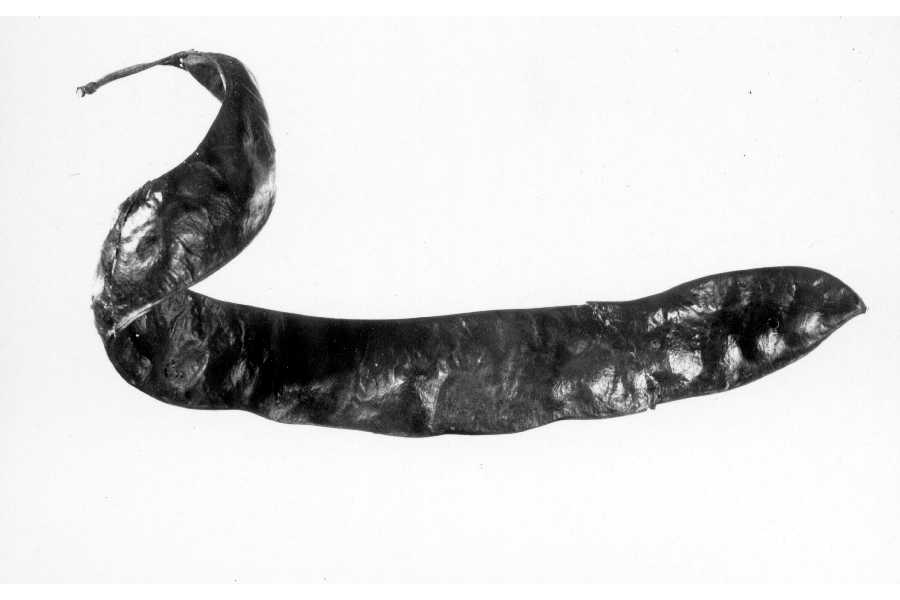 Figure 7.  A single mature fruit pod from the Honeylocust tree. Notice the difference in color between the developing fruit and the fully matured fruit. Image provided by the United States Department of Agriculture.

Native range: The Honeylocust is found in much of the eastern United States (see Figure 8), and is capable of tolerating temperatures as low as -20° to -30° Fahrenheit (-35° to -30° Celsius). Varieties grown in the north end of their range tend to be more tolerant to the cold, though they also go dormant earlier in the year, compared with their southern counterparts.1 Honeylocust grows best in moist soils near bodies of water, though it can survive periods of high heat, high salinity, and drought.3 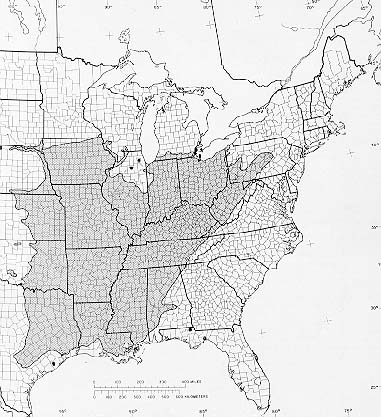 Figure 8.  The native range of the honeylocust tree, image provided by the U.S. Forest Service.

Ecological notes: The Honeylocust spreads its seeds using seed pods it creates every year, with lots of seeds being produced every two years or so.1 Many wild and domestic animals eat the seed pods. Additionally, grazers eat the young shoots in the spring and new bark in the winter.5 Animals eating the seed pods allow the seeds’ hard exterior to soften, and the seeds to begin germination.1 Honeylocusts are very invasive in nonnative stream banks and have affected the functioning of invaded streams. A study done in Buenos Aires, Argentina shows that decomposition of litter and composition of particulate matter were affected at the invaded streams vs the non-invaded streams.4

The trunk of the Honeylocust is commonly used as a dense and durable timber, used for fence posts, railroad tracks, furniture, pallets, and etc. Native Americans that lived where Honeylocusts are common also used to eat the seed pods as a part of their diet and as a sweetener.5 Thornless varieties of Honeylocusts are also planted as ornamental trees, or as erosion control and windbreaks.1 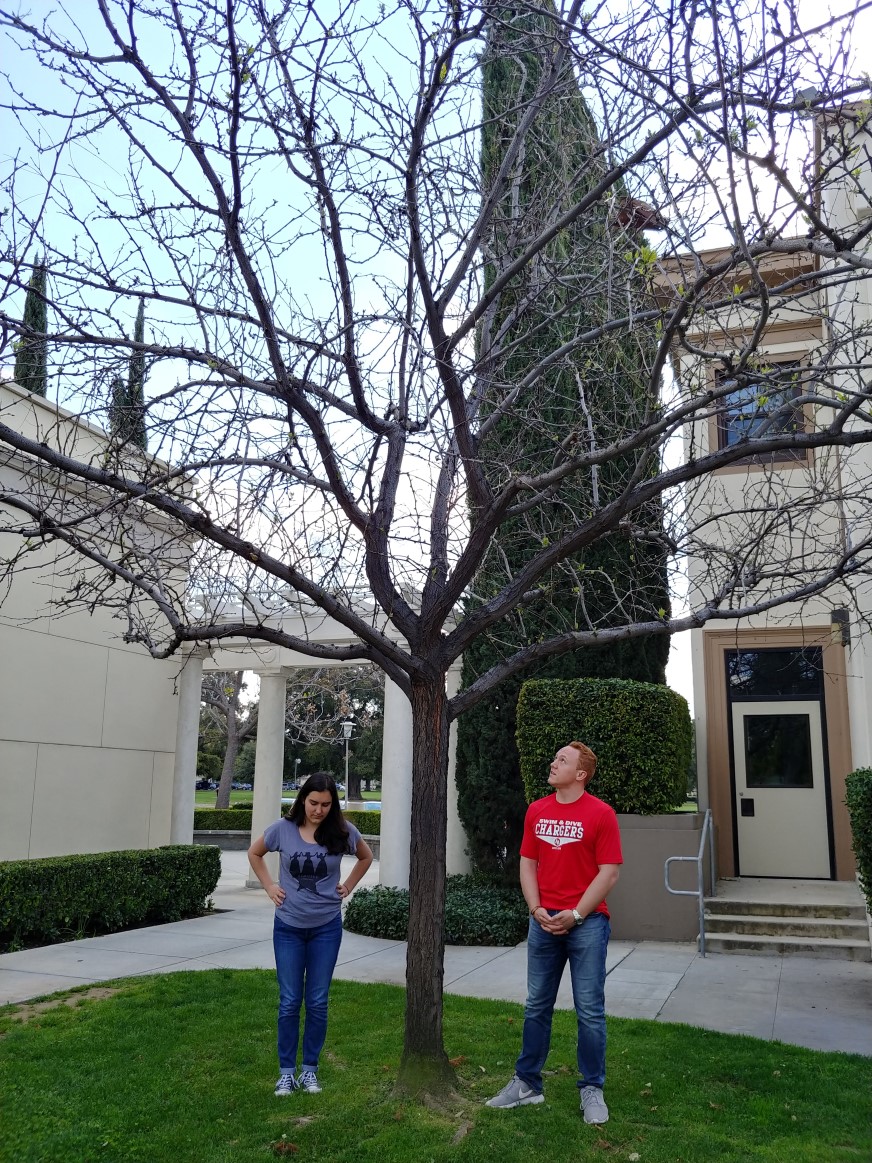