The Redwood Bark Beetle is found on dying or damaged branches of the redwood tree. The adults are usually 3-5 mm long with a bullet-shaped body and are black or brown with reddish wings. If seen under a magnifying glass their antennae are bent like an elbow. They can also be identified by observing the decaying portion of the tree and observing multiple holes in the bark from the adults emerging after growing inside the tree. 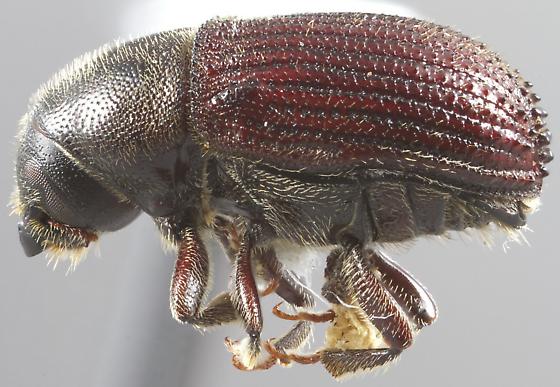 Native Range: The Redwood bark beetle is associated only with the redwood tree so it will only be found where these trees are found on the North American coast. However, bark beetles are commonly found burrowing their way through many other North American trees and can be found elsewhere in the world as well.

Ecological notes: The adult female bark beetle will burrow itself into the bark of the tree and then dig a trench to lay her eggs. The eggs hatch and then the larvae feed on the phloem tissue of the branch. As they are feeding they continue to burrow in various directions feeding and depleting the resources of the branch of the tree and will further damage it or kill it. They are considered pests as they can continue to do this to a weakened tree and eventually kill it. There have been some species of hymenopteran parasitoids that have been identified on some bark beetles within the genus but none specific to the redwood bark beetle. Bark beetles are successful because they spend most of their life cycle protected within the tree.

Control Measures: Healthy trees are generally resistant to bark beetles so it is recommended to keep the redwood trees as healthy as possible. They are considered a pest when they inhabit the tree as they can cause a lot more damage to an already damaged redwood tree. A suggested measure of control is to cut off the infected branches. If the base of the trunk is infected with the bark beetles then it is recommended to cut down the tree completely. The tree needs to be removed and taken away from the area so that the bark beetles cannot infect other trees in the area. It is important not to leave the chopped wood piled near other trees because the bark beetles can get to those trees as well.

The adults of tip miners are moths with a wingspan of 8-9mm. These moths will lay eggs on branches of damaged trees and the pests are the larvae. The larvae will burrow and feed into the branches. A tree with tip miners can be identified because its foliage will turn brown in the winter. When the larvae emerge they are a greenish color and will make cocoons to transform into the moths. They can be identified when they are in the cocoons because they are visible hanging in between little twigs. 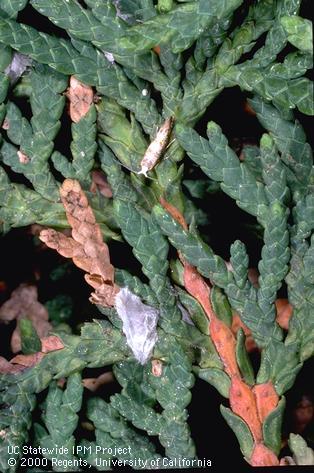 Native Range: Tip miners are native to western North America but have been introduced exotically to Europe. They are generally found on cypress, redwood, and juniper trees.

Ecological Notes: The larvae are found burrowing on the tips of new growth which gives them their name. They burrow into the tips of branches and feed off the nutrients of the tree and then emerge and spin their cocoons off of little twigs. They spend most of their life cycle dependent on the tree.

Control Measures: They are considered pests to many of the trees. Like the bark beetles it is important to have preventative measures and keep the tree healthy in order for them not the get infected with the tip miners. The affected branch can be cut off and the rest of the tree saved. There can be an insecticide used on the branches in the spring in order to kill the moths and prevent them from laying their eggs.