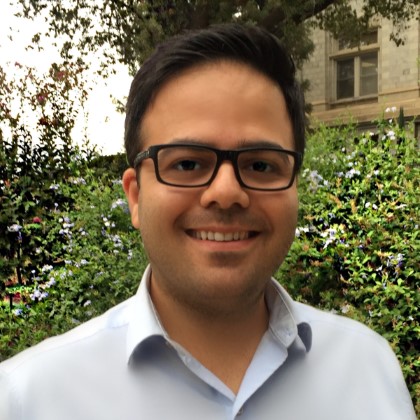 Most of Mehrdad’s past industry experiences were focused in different areas of GIS. He has a broad range of GIS experience from data collection and field surveying, spatial analysis, satellite imagery analysis, lidar data processing and modeling, software development, spatial database implementation, project management, and proposal and contract analysis. His background in geomatics engineering has given him necessary understanding to work as a true GIS expert with respect to geographical aspects. Mehrdad has also done several GIS projects with open source software packages. His close work with various industries helped him to gain a thorough knowledge of how to cooperate with experts from different backgrounds.

In this project, through the use of a location-based mobile application, the level of students'' emotional attachment to various locations on campus will be examined. By applying an Augmented Reality, the enhancement of spatial knowledge will be achieved. The sample of first portion of project (Survey123 for ArcGIS) would be "Campus Emotional Attachment and Survey123 for ArcGIS Form of a group of two and go across a tour of campus. There are spots across campus that you feel more emotionally connected to as well as some that might rise not great moments. Primary emotions are anger, anticipation, joy, trust, fear, surprise, sadness, and disgust. Usually emotions are studied toward human and objects. Emotions toward places is less considered. To make it easier, we can put emotions into two main categories of positive or negative, and anything else neutral. We try to use GIS skills as well as new technologies to bring a new dimension to our campus. Think about buildings and their amenities. Which one do you like and which one you don’t?" Sample of initial questions and student involvement is attached at the end the report. Timeline 1. November, 30, 2017: The project initial report on the app development plan and risk/benefit analysis 2. December 29, 2017: The Survey123 app first design will be offered to students. 3. January 15, 2018 the first version of the AR app will be developed. 4. January 15, 2018 the first version of the open source app will be developed. 5. March 5, 2018 the first draft of the project outcome with students' assessment will be provided. 6. May 8 2017 – Second project presentation and control 7. June 4, 2017 – Project completion and final report