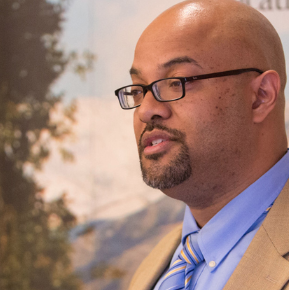 As an undergraduate student, Julius Bailey took a class about religion in America on a whim. The next thing he knew, Bailey had discovered his passion – and changed his major from business to religious studies.

The rest, as they say, is history.

Bailey, now a professor of Religious Studies at the University of Redlands, in 2016 published Down in the Valley: An Introduction to African American Religious History, a textbook named for a slave spiritual that he uses in his introductory course.

It was through teaching this course that he realized that a thorough text was needed to address the topic. “I’d used a few different collections and texts, but there was no single comprehensive narrative that provided all the great resources available about African American religions. Trying to answer my students’ questions led to this book, so it was almost a student-driven project.”

Discussing developments through time is especially interesting for scholars of African American religions. "Because [people] were taken from Africa forcefully, subsequent generations didn’t know exactly where from the continent that they were from. When you have a history taken from you, how do you go about finding a history for yourself?”

African Americans have brought a distinctive understanding and practice to a range of world religions, Bailey says. “In addition, much like during the Civil Rights movement, black churches have been a central source of support for members of their communities and this has extended into the present with contemporary movements."

One of his favorite chapters in the book deals with new religious movements, including African American religions based on a belief in UFOs or ancient Egyptian ancestors. “It’s a very active thing you’re writing about,” he explains. “With religion things are in constant motion.”

Bailey first came to Redlands because it fit his requirement for a university that valued teaching. “I appreciate the University’s focus on the whole student, not just the education piece but the experiential piece,” he explains. "I’m part of a group of dedicated, caring and kind people who value the craft of teaching. They are a great group of colleagues, and I feel free to develop a class, connect my research and teaching, and pursue courses that reflect my interests.”

Bailey’s current research looks at the 19th-century black churches in the American West. “My current passion is to uncover that history and to see how black preachers navigated the dynamics and built community networks.”

His favorite thing about teaching Redlands students is their intellectual curiosity. “They are open to learning and willing to try new things,” he says. “They have the courage to step out of their comfort zone.”

Bailey says Redlands students are well-rounded, write and communicate well, and are prepared for success after graduation.