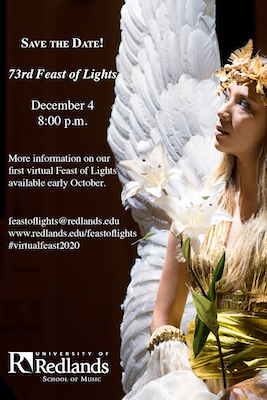 The University of Redlands, will present the 73rd Feast of Lights, a service of worship celebrating ― in spoken word, tableaux, song and instrumental offering ― the birth of Jesus. Although, presentations have differed slightly from year to year, the basic theme has remained constant: the story of the birth of Christ and the symbolic message of the star of Bethlehem as it led the Wise Men to the stable. At the service’s conclusion, the traditional Ceremony of Candles, adapted from an ancient rite, symbolizes the spreading of the light of Christ’s message by the twelve apostles throughout the world.

During its seventy-three years of existence, the Feast of Lights has become one of the most recognizable and respected of our University’s traditions. Under the leadership of Directors J. William Jones, Jeffrey Rickard, and Nicholle Andrews, its fame is nation-wide and much of its music has been recorded. As stated by an early Feast participant and University of Redlands faculty, the Feast is “a tapestry of scripture, poetry, music and drama. Always recognizable at its core, it is ever new in the elements and changes that appear annually in its music, drama and over-all structure.”