Identification: Adults are dull green, with six golden spots on the elytra (3 on each side), with long (about 9.5mm), slender bodies. Larvae are larger and whitish, and leave evidence in the form of tunnel galleries in the bark. 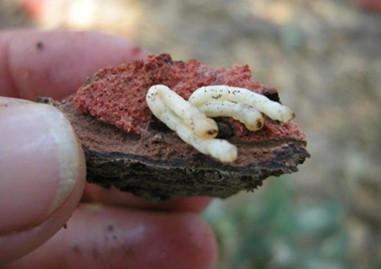 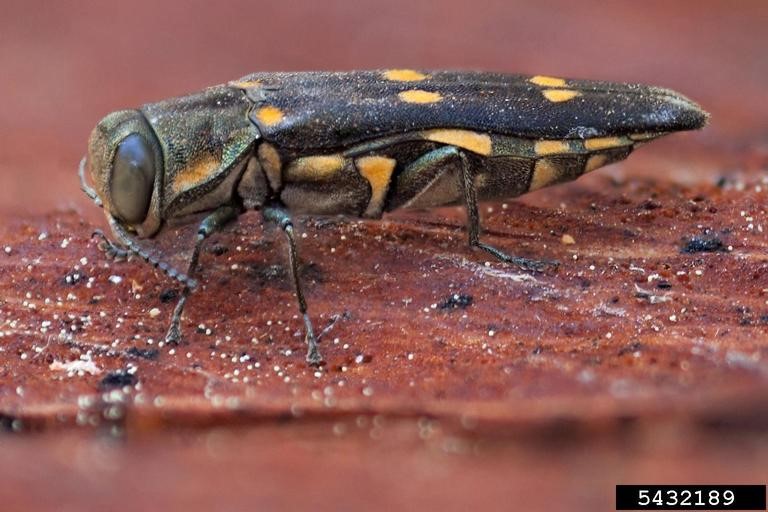 Native Range: A. coxalis is native from southeastern Arizona south to Guatemala, while A. auroguttatus, recently classified as different species, ranges from southwestern Arizona to Baja California, and it is unclear whether the new population is a result of unnatural introduction or range expansion.

Ecological Notes: Eggs are laid in the bark of trees, and larval stages feed on sap and nutrients from the phloem of the infected tree, causing extensive damage. Adults exiting the tree are known to leave D-shaped holes, which are a good indicator to use in monitoring affected trees. They prefer older trees with larger diameters, and an infestation of this species can be fatal to the tree, resulting in visible deterioration of branches and canopy, a phenomenon similar to Sudden Oak Death. Adults feed on foliage, and are not known to cause damage at this stage. Woodpeckers are a natural predator of GSOB larvae, creating holes to reach the larvae deep within the tree, though they will often have to strip away outer bark to be able to reach the insects in the inner phloem of the tree.

Control Measures: So far, the best control method is to stop the spread of GSOB to other trees by early identification and removal of affected trees, especially in places with dense oak growth. Certain parasitoid wasps from Arizona and California may prove to be sufficient biological control agents though there is not enough research yet to show whether any of these species is truly effective (Flint et. al., 2013).

Identification: Larvae are legless and white-colored, located in the deeper layers of the trunk, feeding on sap from the phloem. Pupae can be found at the outer ends of the tunnels bored by the parents and the larvae. Adult bark beetles are small, 1-3mm in length, typically dark brown, with distinguishing tiny white hairs covering their thorax and abdomen. Evidence of bark beetles is observable as intricate tunneling just underneath the outer bark. 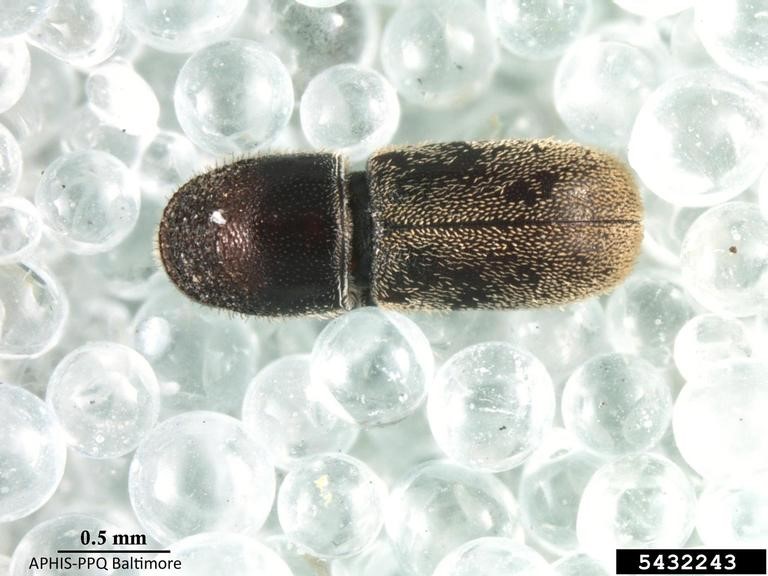 Native Range: P. agrifoliae is reported to occur along the California coast as far north as Marin County and as far south as Los Angeles County, while the range of P. pubipennis is similar but extends farther inland.

Ecological Notes: Oak bark beetles typically affect dead or dying trees, but may move to nearby healthy trees if coming from cut firewood. They are associated with the phenomenon of Sudden Oak Death because they attack trees already weakened by the associated pathogen. Bark beetle adults bore tunnels to lay eggs that are perpendicular to the wood grain, and when these hatch, the larvae bore holes parallel to the grain, forming intricate patterns beneath the outer bark, and when they are ready to pupate they will move back to the outer entrances of the tunnels.

Control Measures: Permethrin is an insecticide used as a treatment for bark beetles that can be applied before or after infestation, and can reduce the rate of beetle infestation on trees infected with Phytophthora ramorum, the sudden oak death pathogen, (Mcpherson et. al., 2008

Identification: Many weevils in the genus Curculio affect oak acorns; C. pardus in particular is known to affect canyon live oaks, and C. occidentis is more widespread and affects a variety of oaks. Larvae can be found by cutting open an acorn that shows round holes left by oviposition, and are white and form a C shape when removed (as opposed to filbert moth larvae, which will be elongated). Adult filbert weevils are light in color with long snouts. C. occidentis is more golden-brown in color, and C. pardus is more grey and more likely to be found on canyon live oak. 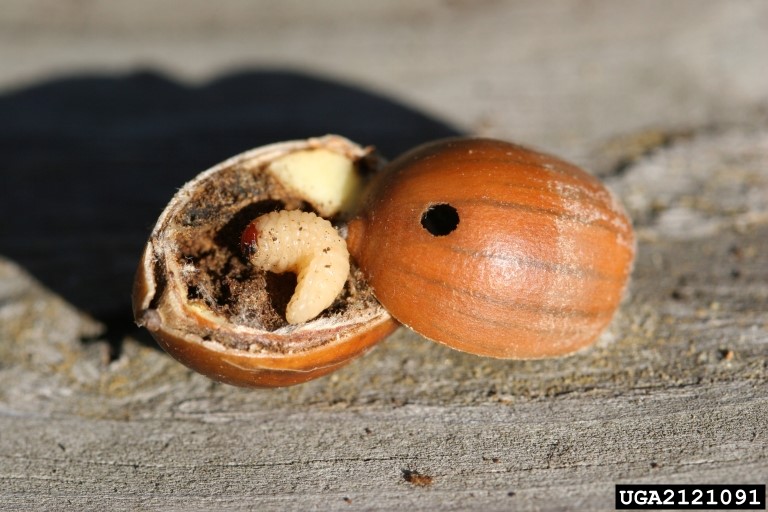 Weevil larvae in an acorn, note the circular entrance hole

Adult weevil in the Curculio genus 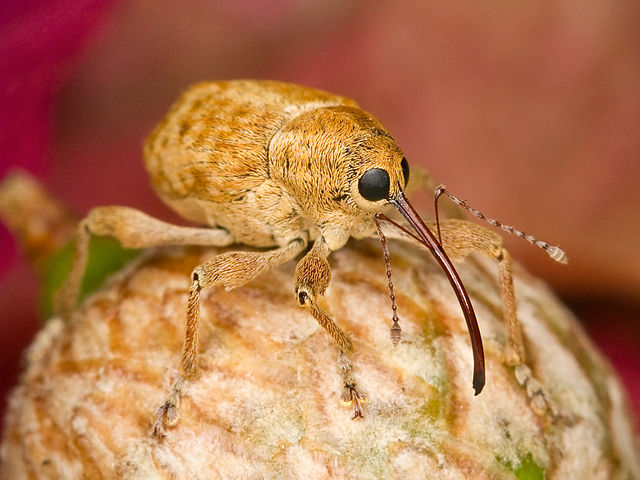 Ecological Notes: Eggs are oviposited in the acorns of oak trees, and larvae will feed on them enough that they drop early. When they mature they will bore out of the seed into the ground, where they will spend their time until breeding. Two to eight eggs are typically laid per acorn. Infested acorns will drop early and often won’t be able to sprout new trees, but filbert weevils do not cause any other damage to the tree. Filbert weevils and filbert moth worms (see below) can be found in the same acorn.

Control Measures: Filbert weevils and filbert worms are considered pests to the commercial hazelnut industry, and are a minor threat to oak species. Research has determined that introducing certain nematodes may be an effective way to control these pests in the hazelnut industry, (Bruck & Walton, 2007). This could easily be applied to oak woodlands if deemed appropriate.

Identification: Adults are less than 1mm long with white wings, and look similar to moths. Nymphs and pupae can be found by looking for the tiny white and black spots on the undersides of leaves (Stanford’s whitefly, T. stanfordi, on the other hand, is found on the upper sides of leaves). Eggs are encased in white, waxy secretions. When they hatch the nymphs are clear but become darker as they mature, and pupal forms are dark and oval-shaped, found on the underside of the leaf. 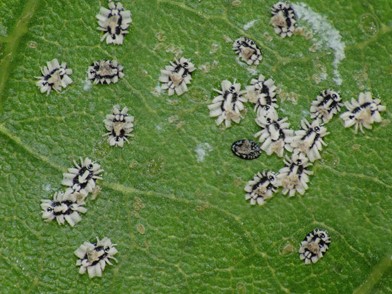 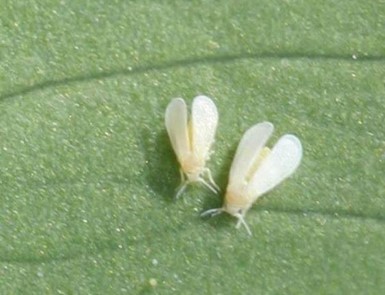 Ecological Notes: When crown whitefly nymphs hatch, they begin to feed on the sap from the leaf, and typically spend their lives until adulthood on one or a few leaves.

Control Measures: Whiteflies are not known to be pests on oaks.

Identification: Filbert worms can be found by looking for evidence on acorns on the tree or the ground, such as an entrance hole about 1-2 mm wide and sometimes silk webs. Larvae are brown to grey in color with a dark head, and up to 18-22mm in length, and will move around when disturbed in an acorn, as opposed to filbert weevil larvae. Adults are moths light reddish brown in color with metallic banding on the forewings. 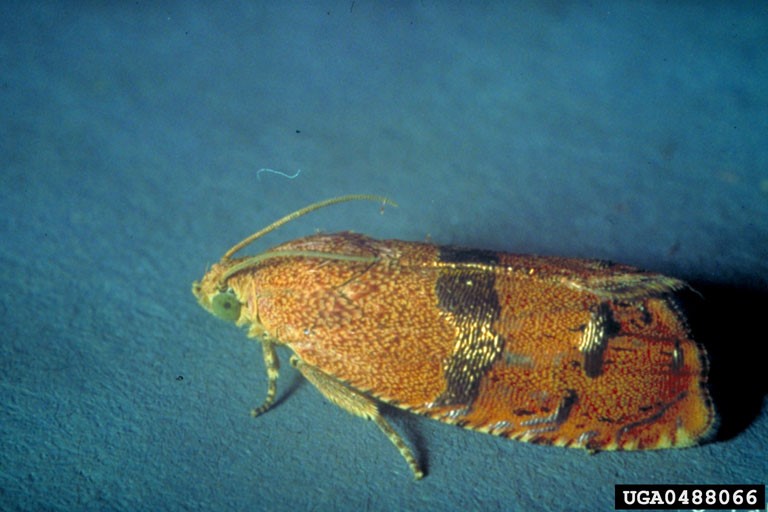 Native Range: Filbertworm moths are distributed across the United States and Canada, occurring most often along the east and west coasts.

Ecological Notes:  Oviposition within acorns occurs one at a time, so only one filbert worm will occupy and consume one acorn. This causes damage to the seed so that it drops to the ground early and is not able to sprout. Once the larva is ready to pupate it will exit the acorn and burrow into the ground to do so. Once the moth emerges it will mate and find more acorns to host its young.

Control Measures: Filbert worms are a significant pest to the hazelnut industry, and various chemicals are used as pesticides, especially in the Pacific Northwest.

Identification: Larvae are black caterpillars with yellow stripes vertical along the body, up to 3cm in length, and a pronounced round, brown head. Pupae are white or yellow in color and may have black patterning. Adult moths are uniformly tan or gray in color, with noticeable dark wing venation, about 15mm long with up to 25mm wingspan. 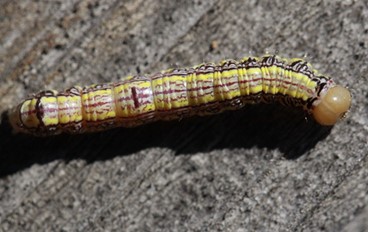 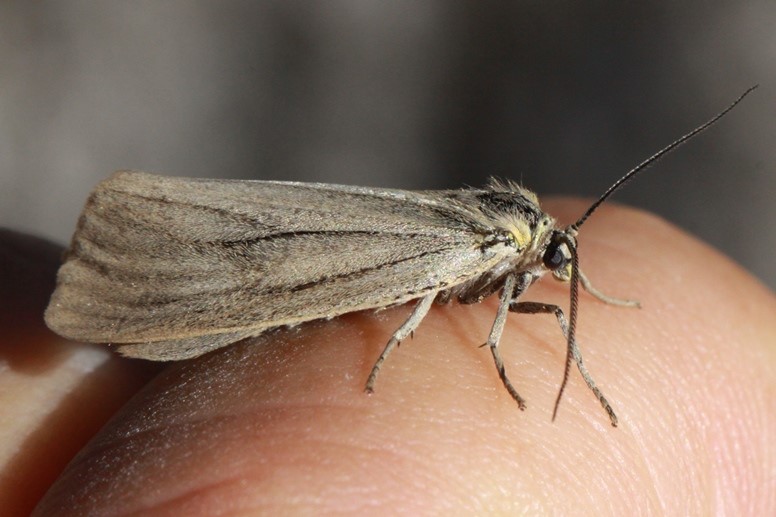 Native Range: Coastal California, found on essentially all oak species within this range.

Control Measures: This species is not known to be a pest.

Identification: (Adult) Golden-brown in color top and bottom, with small tail on the inner, lower forewing. Crescent-shaped markings on the outer edge of wings. Caterpillars are green and difficult to distinguish from many other butterfly species with green caterpillar stages, other than by being located on Q. chrysolepis. 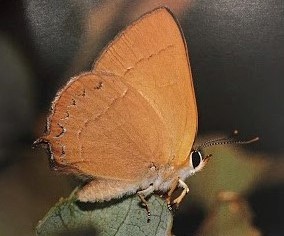 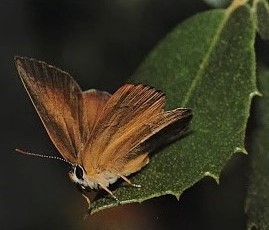 Native Range: Ranges from coastal Oregon to Southern Arizona, but present throughout

Ecological Notes: Eggs laid on twigs of host plants (Q. chrysolepis), and caterpillars will feed on the leaves once hatched. Adults commonly found near host plants feeding on the nectar of nearby flowers.

Control Measures: This species is not known to be a pest

Identification: The galls of D. chrysoleidis can be found singly or in clusters on the twigs of several oaks in the intermediate group, including canyon live oak. They can be roughly 10-20mm in width and length, and, as their common name implies, resemble muffins with dark brown overhanging tops and tan lower parts and undersides, though they have a greenish tinge when first formed. 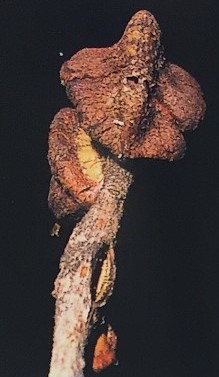 Field Guide to Plant Galls of California and Other Western States

Native Range: Correlates with that of Quercus chrysolepis

Ecological Notes: Each gall supports either one or two larvae, and secretes nectar from the phloem of the oak that attracts ants as protection from other wasp species (parasitoids), in a mutualistic relationship that is common within the genus Discholaspis, (Nicholls et al, 2016).

Control Measures: This species is not known to be a major pest on oak trees.